All His Pretty Girls - blog tour 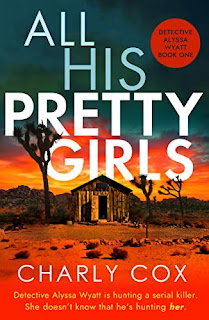 Detective Alyssa Wyatt is hunting a serial killer.
She doesn’t know that he’s hunting her.
A woman is found naked, badly beaten and barely alive in the New Mexico mountains. The shocking discovery plunges Albuquerque Detective Alyssa Wyatt into a case that will test her to the limit.
It appears that Callie McCormick is the latest plaything of a shadowy psychopath that leaves a long shadow on the streets of New Mexico – an individual linked to a string of deaths but leaving no evidence.
But when Alyssa makes a breakthrough that just might reveal the killer, she unknowingly puts herself in the crosshairs of a brutal maniac – one with an old score to settle.
Because the killer knows Alyssa very well, even if she doesn’t know him. And he’s determined that she’ll know his name – even if he has to extract his deadly revenge on her and everything she loves.
The launch of a dark, gripping, completely unputdownable crime thriller series, All His Pretty Girlsintroduces Albuquerque detective Alyssa Wyatt. Fans of Kendra Elliot, Melinda Leigh and Angela Marsons will be utterly engrossed.

This is one of the best debut novels I’ve read in a while.

On the search for a missing woman Detective Alyssa Wyatt finds herself on the hunt for a serial killer. Along with her team they are on a race to find the killer before he strikes again.

I absolutely love that we get to read about her personal life...and it’s normal. She’s got a fantastic husband and two brilliant kids.

This is a brilliant debut novel. It’s a well written story with a great storyline. Honestly I didn’t expect them twists and I so wished I was buddy reading this as I wanted to talk so much about it.
I’m so looking forward to reading more of this series.

Born in the South, raised in the Midwest, Charly now resides in the Southwest in the Land of Enchantment where she enjoys eating copious amounts of green chile and other spicy foods. When she’s not reading, writing, or plotting sinister evils with her antagonists, she enjoys doing jigsaw and crossword puzzles, hanging out with her husband and her spoiled Siberian Husky, visiting her son in Arizona, and traveling, preferably to places surrounded by sun, sand, and warm uncrowded beaches.
Twitter
https://www.facebook.com/charlycoxauthor/
https://www.clcox-author.com/
https://www.amazon.com/Charly-Cox/e/B07WGQN19Q
https://www.goodreads.com/author/show/19490745.Charly_Cox
Posted by Cheekypee reads and reviews at 04:29