Take a Look at Me now - blog tour 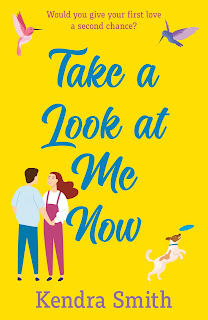 Kendra Smith – Take A Look At Me Now

Out with the old...
Maddie Brown has spent most of her life putting everyone else's needs above her own. But with her marriage crumbling and her nest scarily empty, she realises it may be time to spread her own wings and fly.
In with the... ex?
At a university reunion, Maddie meets Greg. He was the love of her life – and the one that got away. Some things never change, and neither of them can deny the feelings that linger between them. But there are so many reasons they can't be together... not least the massive secret she has been keeping from him all these years.
Maddie is SO ready for a brand new start. But what do you do when the past just won't stay in the past?

Exeter University July 2018
Uni reunion. Class of 1998 – Faculty of Arts
The venue: The Great Hall, place of finals, end-of-year balls, graduation ceremonies, Freshers’ Week festival, and a moment etched into memory that can never be forgotten
The weather: chilly, dry evening
Feelings: nervous as hell
Hello, my name’s Maddie Brown. You might not remember me. I was the kid who had dreams and ambition and then blew it all with a—
No. She wouldn’t think about that. It had taken quite a lot of guts, two pairs of laddered tights, an hour at the hairdresser’s and an exorbitant rail fare to get there. This was the place she left behind in anguish. But it would be OK. She wouldn’t have to relive any of it. Liz had been so sure in her Facebook messages.
Just come, Maddie. You can’t hide forever.
And hiding’s exactly what she’d spent the last twenty years doing. Hiding those emotions, brick by brick, layers of determination, cemented with pain: a sturdy wall to keep those feelings out.
She pulled her shoulders back and hesitated, wondering which Maddie was about to walk up those enormous concrete steps. The twenty-one-year-old one with a life hopelessly unlived in front of her or the one who was actually there tonight? Forty-one, weary, teary, with an empty nest and a dog with halitosis.
She couldn’t quite believe she was about to step back into the Great Hall she’d done her final exams in. How terrified she’d been that week – and not just about her finals, but about the enormity of her situation. Her Sociology paper was first. She’d stared around at the windows, the parquet flooring in case any of it could give her some clues about the final question: ethnicity – it had been a twenty-five-mark bastard.
‘Maddie, there you are!’ She peered at the face. There was something about the green eyes. She knew those eyes… or at least she thought she did. Elliot had had eyes like that, Elliot who had studied first-year Psychology with her – he’d been such a laugh, but this…
‘You don’t recognise me, do you?’ The woman laughed. ‘I’m Ellie – you’ll remember me as Elliot.’ She winked at Maddie, batting down huge fluttery fake eyelashes. ‘But things change, you know?’ She turned her head coquettishly to one side, as if a new view of the thickly applied foundation would help Maddie absorb such a shock. It was, she had to admit, a great party-opener. Hey, remember me, that bloke you knew? Well, now I rock mascara and five-inch heels.
Ellie looked fabulous.
‘Right, Ellie, yes, yes of course I remember! It’s your eyes – beautiful eyes, you always had! You look amazing!’ And she leant over and kissed her on both cheeks, inhaling a very floral perfume. White Linen? And before her, Ellie turned deep red beneath her Max Factor. ‘Oh, that’s very kind, and I’ve found that if I use purple eyeshadow, a kind of mauve actually, it really brings out the green.’ Ellie winked at Maddie.
‘Spot on.’ Maddie grinned at her friend. ‘So, er, how are things?’
‘Well,’ Ellie began, as a waitress filled up their glasses and Maddie took a huge gulp, ‘a bit unsettled, actually, since uni – but I’ve found a new lease of life, found a new life, to be honest.’ She laughed again. ‘A new me!’
‘Well, it really suits you—’ And with that, there was a chink of someone tapping a glass and the room was told to hush.

Kendra Smith has been a journalist, wife, mother, aerobics teacher, qualified diver and very bad cake baker. She started her career in Sydney selling advertising space but quickly made the leap to editorial - and went on to work on several women’s magazines in both Sydney and London. With dual Australian-British nationality, she currently lives in Surrey with her husband and three children.