The Boy Between - blog tour 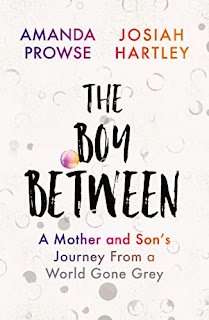 Bestselling novelist Amanda Prowse knew how to resolve a fictional family crisis. But then her son came to her with a real one…

Josiah was nineteen with the world at his feet when things changed. Without warning, the new university student’s mental health deteriorated to the point that he planned his own death. His mother, bestselling author Amanda Prowse, found herself grappling for ways to help him, with no clear sense of where that could be found. This is the book they wish had been there for them during those dark times.

Josiah’s situation is not unusual: the statistics on student mental health are terrifying. And he was not the only one suffering; his family was also hijacked by his illness, watching him struggle and fearing the day he might succeed in taking his life.

In this book, Josiah and Amanda hope to give a voice to those who suffer, and to show them that help can be found. It is Josiah’s raw, at times bleak, sometimes humorous, but always honest account of what it is like to live with depression. It is Amanda’s heart-rending account of her pain at watching him suffer, speaking from the heart about a mother’s love for her child.

This is a truly amazing read from the fantastic author Amanda Prowse and her son Josh. It’s so hard to review this as it’s such a heart breaking read but also one of hope.

I have struggled with depression for over twenty five years. For the last two years my youngest son has struggled and has had meltdowns. The fear in me is pure raw when I’m watching him during these times. Due to my personal experiences this was a hard book for me to read although I’m glad I did as maybe in the back of my mind I won’t feel as alone.

I rarely read non fiction but I’m so glad I read this. Will need to get it in paperback in the hope other family members pick it up and I can seek some solace when needed.

Amanda Prowse is an International Bestselling author whose twenty five novels and seven novellas have been published in dozens of languages around the world. Published by Lake Union, Amanda is the most prolific writer of bestselling contemporary fiction in the UK today; her titles also consistently score the highest online review approval ratings across several genres.  Her books, including the chart topping No.1 titles 'What Have I Done?', 'Perfect Daughter', 'My Husband's Wife', 'The Girl in the Corner' and ‘The Things I Know’ have sold millions of copies across the globe.

A popular TV and radio personality, Amanda is a regular panellist on Channel 5's 'The Jeremy Vine Show' and numerous daytime ITV programmes. She also makes countless guest appearances on BBC national independent Radio stations including LBC and Talk FM, where she is well known for her insightful observations and her infectious humour. Described by the Daily Mail as ‘The queen of family drama’ Amanda’s novel, 'A Mother's Story' won the coveted Sainsbury's eBook of the year Award while 'Perfect Daughter' was selected as a World Book Night title in 2016.

Amanda's ambition is to create stories that keep people from turning the bedside lamp off at night, great characters that ensure you take every step with them and tales that fill your head so you can't possibly read another book until the memory fades...

'A powerful and emotional work of fiction' - Piers Morgan

'Uplifting and positive, but you will still need a box of tissues' - Hello!

'A gut-wrenching and absolutely brilliant read' - The Irish Sun

'You'll fall in love with this...' - Cosmopolitan

A keen environmentalist and animal lover, Josiah (Josh) Hartley lives in a remote farmhouse in the West Country with his two idle and arrogant French Bulldogs, Dottie and Beau. Happiest following the music scene in Bristol, at a festival or watching rugby with his mates, Josh enjoys the outdoor life and often heads to the sea to surf and sit on the beach watching the sun go down.

After a stint at the University of Southampton, another at the University of Bristol and one planned suicide, Josh decided to write about his descent into mental illness and the depression that held him in its grip for the past few years. The Boy Between carries the overriding message that things can and often do get better. It is a book of reflection, raw, honest and full of hope - the proof being that Josh is still here and excited about what comes next. He’s ready to catch any opportunity that life throws his way; quite a thing for someone who only a few years ago was living in a world gone grey, ready to disappear from the face of the earth…

Posted by Cheekypee reads and reviews at 01:25