While Nobody is Watching - blog tour 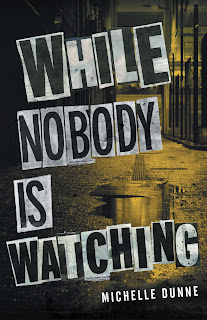 While Nobody Is Watching

A semi-inflated football and a curious little girl.

They called it peacekeeping. For Corporal Lindsey Ryan it was anything but.

It’s been three years since that bright day in the Golan Heights and the explosion which killed two and changed the survivors forever.

Now Lindsey deals with the many problems of the city’s troubled youth, to distract her from her own. But as damp days turn to night the kids return home, or somewhere like it, and she returns to

her own private war. One that exists solely for her.

Certain that she’s being watched and certain that she’s losing her mind, Lindsey battles with the demons of post traumatic stress, while a very real threat edges ever closer until she finds herself face to face with someone who wants nothing more than to finally help her to die.

And it’s the last person she ever could have seen coming.

battle scarred soldier struggling to find a place in her new world.

While Nobody is Watching is my first but certainly not my last read by this author. Lindsey is suffering from ptsd after being seriously injured while on duty. While dealing with this she needs to deal with a stalker. She is a strong likeable character.

When I wasn’t reading this story I was thinking about it.. a good sign that it’s grabbed me hook, line and sinker.

This is a really well written thought provoking story that will stay with me for a long time.

Michelle Dunne wore a Blue Helmet in South Lebanon with B Company the Irish army and the UN, probably in that order.

She now lives in Cobh with her husband, daughter and a cast of characters waiting to be written about.

Michelle was one of those sporty types growing up, all bony elbows and knees, and as she lived on an island, it stood to reason she’d spend her first couple of decades taking in the salty, seaweedy air

at the local rowing club (not the serene looking, posh rowing, but the other kind, undertaken by hardy fishermen).

This was where she learned just about everything she ever needed to know about anything. They brought home the County’s, All-Ireland’s were won, but the banter on the bus was always the real

prize. From there it made sense that she’d leave town and join another club/asylum and found herself wearing a blue helmet somewhere in South Lebanon.

She’d become attached to the UN, but more importantly, to B-Company, the boldest, brightest, bravest the Irish army had to offer. She called them lots of other names too, but only to their faces.

As tracer rounds lit up the sky above her and artillery rained down, she learned the words of every patriotic Irish song ever written and how to smile, laugh, and joke about things that would otherwise have you curled in a ball, rocking back and forth in the corner of the room.

Once her eyes had been opened and she returned to Irish soil, Michelle was promoted and following a spell back at college, is now a part of a company providing physiotherapy and staff training in nursing homes and hospitals all over Munster. A slower pace, but still an unruly bunch when they want to be. She’s back living on the island of Cobh with her husband Dominic and their daughter

Emily and the hundreds of colourful characters waiting to make their way onto a piece of paper.

While Nobody is Watching is Michelle’s third book, which draws from her military experiences and the types of relationships that form within its ranks.

Posted by Cheekypee reads and reviews at 14:15