NEW RELEASE
Title: Love in a Snow Storm
Series: Pine Harbour #2
Author: Zoe York
Genre: Adult, Contemporary Romance
Release Date: December 16, 2014
Goodreads: https://www.goodreads.com/book/show/23289699-love-in-a-snow-storm?ac=1
Buy Links:
Amazon: http://goo.gl/B2kKmZ
Amazon CA: http://goo.gl/cO4OVo
Amazon UK: http://goo.gl/vO4aHB
Amazon AU: http://goo.gl/fNbLbb
B&N: http://goo.gl/0Uf0dR
Kobo: http://goo.gl/4bbdIU
Blurb:
Never fall in love with your best friend's little sister...
Contractor and army reservist Jake Foster fell in love with Dani Minelli when she was a colt-legged high school senior. He knew he was too old to even look at her, let alone touch.
Dani’s been trying to get his attention since returning to Pine Harbour a grown woman—and failing miserably at every turn.
This winter, everything is going to change. And when the snow stops falling, Jake and Dani won't be able to hide from their attraction any longer.
Excerpt
“Goodnight, Dani.” His voice was strained as he pushed up and away from the porch. Without thinking, she leapt up and grabbed his forearm, trying desperately not to think about how absolutely awesome it felt under her hand. Hot, silky skin covered in soft, golden hair. Corded muscles flexing as he stood there, still not looking at her. “You should go to bed.”
“I’m not a kid.” She swallowed hard and stood her ground. “I don’t get it. You drive me home, but you can’t even stand to look at me. I can’t pay you a compliment without you getting weird. All because you see me as Rafe’s twelve-year-old kid sister. Newsflash, buddy—I’m a woman.”
He turned so slowly that she half expected him to stop long before he did. But he didn’t freeze when his gaze connected with hers, or when his upper body had twisted back in her direction. He didn’t stop until he turned all the way around and they somehow went from her holding his arm to him holding both of hers. His large, strong hands slid up to firmly grasp her upper arms and he pulled her close.
“I know you’re a woman,” he said, his words strained. “That’s the problem.”
“You know…” Suddenly aware of her breathing, Dani tried to play it cool. “You don’t see me as a twelve-year-old?”
He gave her a baleful look that revealed just enough masculine hunger to keep her from feeling silly. “No.”
Dani had read enough romance novels to know what came next. Her heart pounded in her chest as she stared into Jake’s eyes. He was looking at her, really looking at her, and unless she was pathetically mistaken, he wanted to kiss her. Any second now, he’d close the gap between their bodies and she’d feel him hard against her belly. The thought made her weak at the knees and wet between her legs.
But he didn’t pull her closer. He didn’t move away, either, just held her there, staring. She said his name, quietly at first and then repeated it again a little louder, and he cut her off the second time, his voice strained. “I can’t. Your brothers…hell, my brothers would kick my ass.”
“It’s none of their business,” she whispered, pressing up on her tiptoes. Maybe she could arch her back and trick him into kissing her.
He frowned. “It’ll be everyone’s business. And that will be the end of my business before it even starts.”
“Because of one little kiss?”
His brows knitted together. “It wouldn’t be—“ He let out a harsh exhale and released her arms only to slide his hands into her hair and pull her face toward his. But his kiss landed on her forehead instead of her lips, and Dani’s heart cracked. “Go back to college. Forget that your brother’s friend is a dirty old man who likes the way your hips look in blue jeans.”
He squeezed the nape of her neck gently before stepping back and lifting his hand in an absent wave as he walked backward down the front walk. She pressed her unkissed lips together and watched in disbelief as the object of her long-held affection drifted away.
In The Series:
Love in a Small Town (Pine Harbour #1)
Goodreads Link: https://www.goodreads.com/book/show/22454777-love-in-a-small-town?from_search=true
Buy Links:
Amazon: http://goo.gl/4kq2it
Amazon CA: http://goo.gl/071epz
Amazon UK: http://goo.gl/VfqE1T
Amazon AU: http://goo.gl/Y319uE
B&N: http://goo.gl/qK1DWv
iBooks: http://goo.gl/U2ljnK
Kobo: http://goo.gl/JOvzdP
Author Bio:
New York Times and USA Today bestselling author Zoe York is a busy working mom of two young boys, wife to a very understanding soldier, and creator of modern, sexy, small town contemporary romances. Her debut novel, What Once Was Perfect, started the popular Wardham series, and her first military romance, Fall Out, was released as part of the international bestselling SEALs of Summer super bundle.
She lives in London, Ontario and is currently chugging Americanos, wiping sticky fingers, and dreaming of heroes in and out of uniform.
Social Media Links:
Website: www.zoeyork.com
Facebook: www.facebook.com/zoeyorkwrites
Twitter: www.twitter.com/zoeyorkwrites
Amazon: www.amazon.com/Zoe-York/e/B00DEW9HDM/
Goodreads: https://www.goodreads.com/zoeyork
Giveaway: 1 - $25 Amazon GC; 1 - signed Love in a Snow Storm paperback; 10 - ebook copies, Love in Small Town
Link: http://www.rafflecopter.com/rafl/display/81aa7894349/ 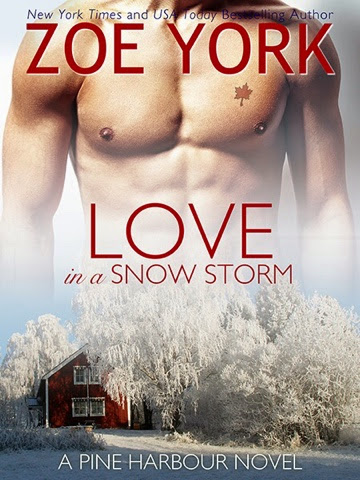 Posted by Cheekypee reads and reviews at 06:29