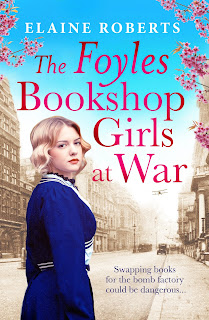 The Foyles Bookshop Girls at War by Elaine Roberts

About the author
Elaine Roberts had a dream to write for a living. She completed her first novel in her twenties
and received her first very nice rejection. Life then got in the way until she picked up her
dream again in 2010 and shortly afterwards had her first short story published. Elaine and her
patient husband, Dave, have five children who have flown the nest. Home is in Dartford,
Kent and is always busy with their children, grandchildren, grand dogs and cats visiting.

About the book
'A delightful story of friendship, love and hope during the dark days of WW1. Elaine
Roberts is a bright new star in the world of sagas' Elaine Everest.
Swapping books for the bomb factory takes courage – and could be dangerous.
Working at the Foyles bookshop was Molly Cooper's dream job. But with the country at war
she's determined to do her bit. So Molly gathers her courage, and sets off for the East End
and her first day working at Silvertown munitions factory...
It's hard manual labour, and Molly must face the trials and tribulations of being the 'new girl'
at the munitions factory, as well as the relentless physical work.
The happy-ever-afters Molly read about in the pages of her beloved books have been lost to
the war. And yet the munitions girls unite through their sense of duty and friendships that
blossom in the most unlikely of settings...
Perfect for fans of Elaine Everest, Daisy Styles and Rosie Hendry.
Look out for the next in the Elaine Roberts' heartwarming series The Foyles
Girls series, Christmas at the Foyles Bookshop, coming soon!

Molly frowned as she looked at the front of the house. ‘Sorry, Ma.’ She shook her head, as guilt coursed through her veins.
A dog barked several times, in the distance. Was that a curtain moving?
Grabbing her bicycle, she pedalled as if the devil himself was after her. As relief spread through her, Molly took a deep breath. She wasn’t used to seeing five-thirty in the morning, but had managed to leave the house without being spotted. Could she do it again tomorrow, and the day after, and again after that? She didn’t know, but would worry about it then. She was determined she wasn’t going to let her parents, or the cool wet start, dampen her spirits. What she was doing was for the best. They’d understand, wouldn’t they? So why did you leave them a note, instead of talking to them? Her conscience bit back and Molly shook her head. She couldn’t think about it now.
It wasn’t long before she was cycling past Soho Square Gardens and turning right, into Greek Street. Her bell-shaped skirt wrapped itself around her legs. Her parents had been worried and hadn’t hidden their concern, when she followed the modern trend of wearing hems shorter, showing her ankles. Whatever next, trousers? Molly had seen it on their faces; the beginning of the end. The fear of what their daughter might become. They hadn’t mentioned the words harlot or strumpet, but they’d hung in the air between them. Molly had shrugged off their concerns and ignored the looks, every time she came downstairs.
Now, as she pushed down on the pedals, she questioned the wisdom of wearing heeled shoes. Her friends, Alice and Victoria, had warned that cycling across London, to the east end’s Silvertown munitions’ factory every day, would be too much, but as always, she had known best.
Her stomach gurgled with the realisation there was going to be no food until lunchtime. She should have been brave and had breakfast, but hadn’t wanted to face the questions. Anxiety tripped down her spine, as she wondered if her note had been discovered yet. Don’t think about it, the voice in her head shouted. Just concentrate on what you’re doing. The deed had been done.
‘Morning.’ An old lady shouted, between wiping the windows of The Pillars of Hercules public house, and wringing her cloth.
Molly took a deep breath. ‘Morning,’ she gasped.
The lady brushed the back of her hand across her forehead, moving the grey curls that had escaped her mob cap. She stared at the windows as she rubbed vigorously, her voice shaking with the exertion. ‘Take care, lovey, it looks like it might be a wet one today.’
Trying to breathe deeply, Molly could only nod in response. She turned left into Shaftesbury Avenue, pausing near the end, to take in the large Victorian building. The Palace Theatre looked intimidating with its domes on the ends. Her fanciful imagination always thought they looked like ears, while the many large windows were the eyes of the building. They listened and stared out at the junction with Charing Cross Road, keeping a watchful eye over London, as the roads became busier. Men in suits hailed taxis, which patrolled the streets, looking for business. Molly gasped as a tram sped past, causing her bicycle to wobble in the breeze it created. She hadn’t realised London was so busy, this early in the morning. The noise of engines, along with horses and carts clattering along the street, were gradually building to a crescendo.
A lad stood on the street corner, with newspapers tucked under his arm. He wore his flat cap at a jaunty angle, and his trousers didn’t meet his worn down shoes. He yelled out. ‘Get yer daily paper ’ere.’ He paused. Molly wondered if he’d made a sale. ‘Come on gents, let me earn me breakfast. You give me an ’a’penny, and I’ll give you a newspaper. It’s a fair exchange now, there’s no robbery intended.’
Molly smiled to herself. Maybe tomorrow, she would stop and buy her own newspaper. After all, wasn’t she striving to be a grown up.
‘Get yer paper ’ere.’ The boy’s message carried along the street.
Molly’s slim legs were past aching. They were heavy and each pump of the pedals burnt the muscles in her calves and thighs. As she cycled past Leicester Square underground station, it was tempting to take her friend’s advice and forget about saving money and the exercise doing her good. Her initial enthusiasm was already waning and she still had such a long way to go. Molly sucked in her lips and shook her head. Anger gripped her, the flush of her face hidden by the exertion. She had been prepared to give up at the first sign of difficulty. A couple of weatherworn young men, dressed in their army uniforms, were walking towards her. She held their gaze for a second before looking away, wondering if they would now march everywhere. ‘You’re the reason I’m doing this’, she mumbled to herself. “Now get on with it girl.’ She sighed. It was a good job the men at the front didn’t give up so easily, or Germany would be ruling the world.

Posted by Cheekypee reads and reviews at 06:41