A Prayer For The Broken - blog tour 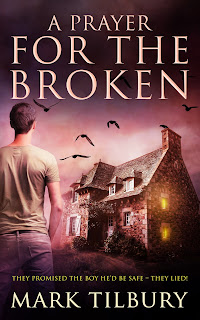 They promised him he’d be safe – they lied!

When eleven-year-old John McCormack’s mother is murdered, he is placed in the care of Pastor Ian Stone and his family. Clearwater House is a far cry from the squalid flats he’s been used to, but John soon learns that Pastor Stone’s perverted form of religion is anything but compassionate. As Stone attempts to purify John’s soul of “dangerous levels of toxicity”, it becomes increasingly clear that he’s at the mercy of a madman.

Who can John tell when no one wants to listen?

Who can he trust when all he knows is betrayal?

A Prayer for the Broken is a story of loss, pain, and one child’s fight to escape a sadistic killer who has complete control of him.

Yet again this author has written a brilliant story that had me gripped from start to finish. The storyline isn’t for everyone. It’s one of them stories that you try thinking it’s only a story but you know stuff like this happens too much.

My heart broke for John. He is ten years old and alone. He was content in foster care but it was only temporary. Now he is left in the care of Pastor Stone and his wife. First impressions aren’t good and he realises quickly he’s right. A place where he should feel safe turns out to be his worst nightmare.

I’m not saying much more about the storyline. If you’ve read anything by this author you will know his stories are not easy reads but must reads. I highly recommend you read this.

Mark lives in a small village in the lovely county of Cumbria,
although his books are set in Oxfordshire where he was born and raised.

After being widowed and raising his two daughters, Mark finally took the
plunge and self-published two books on Amazon, The Revelation Room and The Eyes of the Accused.

He's always had a keen interest in writing, and is extremely proud to have had seven novels published
by Bloodhound Books. Now self-publishing, Mark has published The Last One To See Her and his
most recent book, A Prayer For The Broken.

When he's not writing, Mark can be found playing guitar, reading and walking.

Posted by Cheekypee reads and reviews at 02:09