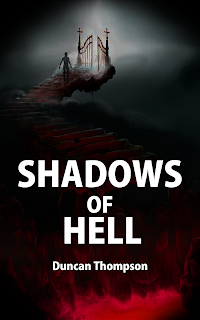 Shadows of Hell by Duncan Thompson

When a man of heavenly worth sins in Hell, darkness shall reign upon the earth

A message from the other side - an omen of the impending apocalypse. A message intended for one man, the only man who can prevent Armageddon, saving the soul of every man, woman and child on Earth. That man is Joe Costello.

But, not only is Joe trapped in the underworld, he is also the same man who has the power to unleash the shadows of hell upon the world.

Inspired by Dante Alighieri's The Divine Comedy, Joe must battle his way through the nine circles of Hell - his escape being the key to salvation. Not only will he face all manner of Hell's demons, he'll also face his own.

However, Joe is not alone on his journey, as he is guided through each level of Hell by medium and psychic, Layla Thorne. Shadows of Hell is the epic follow-up to Shadows of the Woods.

'Shadows of Hell thunders along at a breakneck pace, not giving the reader chance to draw breath.' - Lee Mountford, author of The Demonic

I read a previous book by this author so I was super excited to read this one and I wasn’t disappointed.

Shadows of Hell was a total unexpected surprise for me and this follow up was just as good if not even better.

Although not a genre I usually jump into I’m so glad that I signed up for this tour so I got to read this story. Really looking forward to reading more from this author in the future.

Duncan has spent most of his life in a small market town in West Yorkshire — the same town in which most of his stories are set under the guise of Ravenfield. Duncan has been writing works of fiction since the age of seven. In those early days, his stories often involved himself and his friends being transported to fantasy worlds. However, as a teenager, Duncan fell in love with horror movies and his writing took a whole new direction.

Duncan still lives in West Yorkshire with his partner and their two young children. He also has slight obsession with Spider-Man and the actor Bruce Campbell, as well as having an addiction to vinyl records, coffee and Lego.

Posted by Cheekypee reads and reviews at 02:28