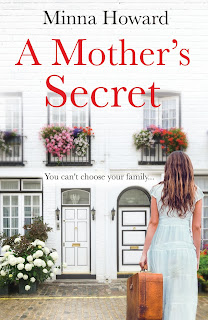 A Mother’s Secret – Minna Howard
About the author

Minna has had an exciting career in fashion journalism and now writes full time, whilst enjoying time with her grandsons and working as an occasional film and TV extra. She lives in London.

Verity seems to have it all. A beautiful home, two grown-up sons and a husband who has always been her rock. But one day, the doorbell rings. And it changes Verity's life forever.
Saskia has nowhere else to go. Before she died, her mother left her with her father's name and nothing else. The only way for Saskia to take care of herself – and her unborn baby – is to find the father she never knew. And the family that didn't know she existed.
This family secret means the end of everything they've ever known. But could it also be the chance for a new beginning?

Verity Walton unlocked her front door and went inside, feeling the silence in the house enclosing her like a fog. She’d just dropped off her two sons, Marius and Toby, at the station to go back to university after their long summer break. So now, with her husband Nathan in Singapore, sorting out some business fiasco, she was home alone for the next month or so.
The shrill ring of the doorbell behind her made her jump. It was probably the postman; she’d seen him coming up the street behind her. She opened the front door and a young woman hovered there, inspecting her warily.
She had a strong yet attractive face, with hazel eyes and thick auburn hair tied loosely back with a yellow ribbon. She was probably one of Verity’s sons’ many friends and hangers-on, from the cheerful crowd that surrounded them; she could never keep up with them all.
Verity smiled. ‘Can I help you? I’ve just put Marius and Toby on the train to Nottingham. Their term starts on Monday, so I’m afraid you have just missed them.’
The woman frowned and appeared bewildered. She hovered a moment longer on the doorstep and then, with a look of determination on her face, she darted past Verity and into the hall. She seemed nervous, glancing round the tiny hall, the staircase ahead of her and the passage leading to the kitchen, as if checking for danger.
‘Can I help you?’ Verity spoke a little more sharply this time. The woman was dressed in a soft yellow corduroy dress and a well-cut jean jacket. ‘Sorry, I don’t remember meeting you before but then I don’t know all my sons’ friends.’
She now noticed that the young woman was pregnant. She was tall, slight and slim but she was obviously a few months gone. For an instant the sight unnerved Verity. Was one of her boys responsible for this? She and Nathan had always been open about such things with their sons… anyway, why should this woman’s condition have anything to do with them?
‘This is Nathan Walton’s house, isn’t it?’ the woman demanded, regarding her boldly, cupping her hand over her baby bulge.
Verity leant against the door jam. Was Nathan responsible for this person’s condition? The thought taunted her. She found it hard to breathe and chided herself for jumping to conclusions. Though, if she thought about it, she felt that they seemed to have lost some of their closeness together since he’d been promoted at work and both of their sons had left for university, leaving them alone again, just the two of them.
She trusted Nathan. Surely he’d tell her if he’d strayed? Or anyway, being the truthful, decent man he was, wouldn’t his guilt have given him away?
The woman now asserted herself and took charge. ‘Can we sit down?’ She glanced at the open door to the living room beside them in the hall.
‘Tell me what this is about first.’ Verity pulled herself together. The woman did not look threatening. She was a little older than her sons’ usual crowd, but she could be the sister of one of their friends. Besides, Verity was used to young people as she taught A levels at a crammer in Queen’s Gate.
‘It’s personal and I’m quite tired.’ The woman smiled apologetically. ‘I walked here from World’s End, I got off the bus too soon.’

Posted by Cheekypee reads and reviews at 11:13