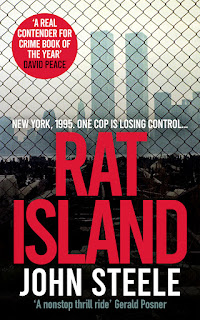 'A REAL CONTENDER FOR CRIME BOOK OF THE YEAR' David Peace

'FANS OF DON WINSLOW WILL LOVE THIS' Claire McGowan

New York, 1995. Cop Callum Burke arrives in New York from Hong Kong, drafted in as part of an international investigation into organised crime.

With the handover of Hong Kong to China only a couple of years away, gangsters are moving their operations out of the territory and into New York ahead of the looming deadline.

Burke’s experiences with East Asian crime and the Triads’ links to the Irish Mob make him the perfect man to send in undercover.

But as he infiltrates these vast and lethal criminal networks, bodies start to pile up in his wake and his conscience threatens to send him over the edge.

And when Burke’s NYPD handlers push him to continue the investigation at all costs, he may have to cross the line from cop to criminal just to stay alive…

Readers of Don Winslow, Michael Connelly, Steve Cavanagh, Richard Price and John Sandford will love this dark and morally complex novel which presents a searing portrait of mid-1990s New York as you’ve never seen it before.

'A nonstop thrill ride... a lyrical, super read filled with plenty of intrigue, action and suspense and sent against an exotic and seldom explored corner of crime fiction' Gerald Posner

This is my first and certainly not my last read by this author.

I loved that we get two different settings in New York and Hong Kong. It’s the nineteen nineties and Callum Burke is investigating organised crime.

I found this to be a gripping read with plenty of twists and turns. If your looking for a well written cop story then I definitely recommend this read.

John Steele was born and raised in Belfast, Northern Ireland. In 1995, at the age of twenty-two he travelled to the United States and has since lived and worked on three continents, including a thirteen-year spell in Japan. Among past jobs he has been a drummer in a rock band, an illustrator, a truck driver and a teacher of English. He now lives in England with his wife and daughter. He began writing short stories, selling them to North American magazines and fiction digests. He has published

three previous novels: RAVENHILL, SEVEN SKINS and DRY RIVER, the first of which was longlisted for a CWA Debut Dagger award. John’s books have been described as ‘Remarkable’ by the Sunday Times, ‘Dark and thrilling’ by Claire McGowan, and ‘Spectacular’ by Tony Parsons. The Irish Independent called John ‘a writer of huge promise’ and Gary Donnelly appointed him ‘the undisputed champion of the modern metropolitan thriller’.

Posted by Cheekypee reads and reviews at 06:17