The Pentagon Group series is a three part series of contemporary romance/erotica novels with suspense. Rebound is the first book and is followed by Unbound, which have been in circulation since April and September of 2014. Both books are being re-released today, March 30, 2015, exclusively on Amazon and Kindle Unlimited.

Rebound, The Pentagon Group, Book One, is available for 99 cents: A year after Perla Mercurio divorced her first lover in a contentious divorce, she resigned herself to being single. After a doctor's visit, she meets Dr. Mathias Keene, and her attraction to him sparks her sexual desires. When Perla and Matt dance at a club, their chemistry is undeniable. Immediately, they undertake a whirlwind romance. Perla falls head over heels in love with the dashing doctor, but is he all that he seems?

Unbound, The Pentagon Group, Book Two, is available for $2.99: Perla Mercurio discovers that the man she fell in love with, Dr. Mathias Keene, wooed her under false pretenses. Upon her discovery of the truth, she tries to mend her broken heart, leaving the handsome doctor in her past. However, Matt is not so easy to shake off. In an effort to win back the love of his life, he makes Perla an offer she cannot refuse. To move forward with her life, Perla must make the hardest decision she's even encountered. Will she be able to move on from Matt and the men of The Pentagon Group?

Bound, The Pentagon Group, Book Three will be published in April of 2015. Cover reveal for Bound will be available before publication and will be found exclusively on Amazon and Kindle Unlimited. 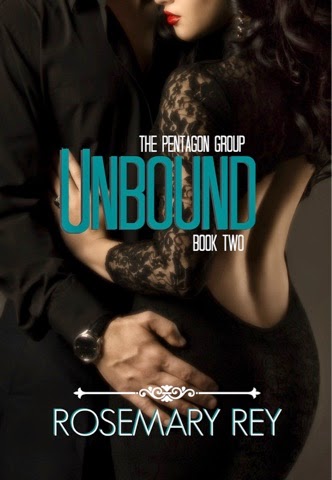 Posted by Cheekypee reads and reviews at 03:38