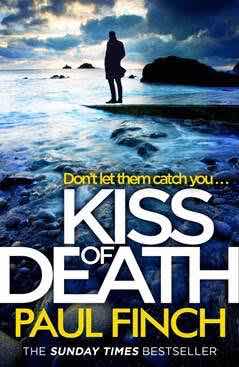 Could this be the end for Heck?

The Sunday Times bestseller returns with an unforgettable crime thriller. Fans of MJ Arlidge and Stuart MacBride won’t be able to put this down.

Don’t let them catch you…

A Deadly Hunt
DS ‘Heck’ Heckenburg has been tasked with retrieving one of the UK’s most wanted men. But the trail runs cold when Heck discovers a video tape showing the fugitive in a fight for his life. A fight he has no chance of winning.

A Dangerous Game
Heck realises that there’s another player in this game of cat and mouse, and this time, they’ve not just caught the prize: they’ve made sure no one else ever does.

A Man Who Plays With Fire
How far will Heck and his team go to protect some of the UK’s most brutal killers? And what price is he willing to pay?

It was through one such viewing port that Heck now watched as Rabbit, aka Dennis Purdham, was interviewed. Of all five suspects, he had been the most visibly distraught on arrest. Aside from their leader, Wolf, also known as Ranald Ulfskar, the others – Sherwin Lightfoot (Goat), Michael Hapwood (Toad) and Jason Renwick (Boar) – had also registered surprise and shock when the police showed up, but as with any cult, and that was what Heck felt they were dealing with here rather than a conventional criminal gang, they’d drawn strength from their leader’s stoicism, and were obediently keeping their mouths shut.

Like the rest of them, he’d struck Heck as an outsider: unshaved, long-haired, pockmarked. The clothing they’d seized from him mainly comprised oil-stained hunting gear and mismatched bits of army surplus wear. But, at the age of twenty-three, Purdham was much younger than his confederates, and possibly only involved in the murders as a bit player – or so his solicitor was seeking to intimate. He’d wept when they’d booked him in, and wept again when they gave him his white custody suit. As such, while the others were left to stew in their cells, it wasn’t long into Purdham’s interview before he’d begun to talk.

The interviewers were Gemma Piper and Jack Reed, who, by prior agreement, was adopting an understanding guise. It was this that Purdham had responded to, gradually regaining his confidence.

‘At the end of the day, Christians are a set of vile bastards,’ he said in broad Staffordshire. ‘Everything about them stinks. Their hypocrisy, their dishonesty . . . they’re a bunch of fucking control freaks too.’

‘Someone give you a hard time when you were young, Dennis?’ Reed asked. ‘A priest maybe?’

‘You mean was I kiddie-fiddled?’ Purdham shook his head. ‘Nah . . . never happened to me. But there are lots it did happen to, aren’t there?’

‘So, you and your friends were responding to sexual misdoings?’ Gemma said. ‘Is that what you’re saying?’

Purdham hesitated, unsure how to reply.

He wasn’t as stupid as he looked, Heck thought, because to admit to this would be to admit premeditation.

‘Because in case you did,’ Gemma added, ‘I can tell you that there’s never been any suspicion about those three people. Or about the Reverend Hatherton, who is the incumbent at Milden St Paul’s.’

‘That means he’s the one I stepped in for tonight,’ Reed explained.

Posted by Cheekypee reads and reviews at 00:44