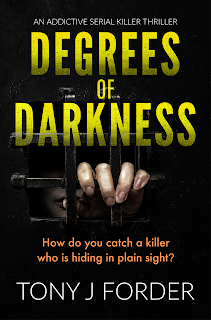 Blurb
Pre-teen girls are being abducted from their homes and their families murdered.  When Frank Rogers, once a DI with the Met and now running his own debt collection agency, is told that his own daughter is missing, his son murdered, he naturally wants to become involved with the case.
Soon Frank’s face is all over the news. In an unexpected turn of events, the killer contacts the police and says he is willing to talk, but only to Frank.
When the body of the first abducted girl is discovered, Frank realises it is a race against time to save his daughter.
In order to solve the case, Frank must work out how the killer is picking his victims.
But how do you catch a murderer who is hiding in plain sight? And can Frank unravel the mystery, when he has so much to lose?

Remarks
Degrees was the first book I wrote, and I did so more than two decades ago. Whilst it remains the darkest, most psychologically tense novel I have written, featuring the sickest antagonist I have so far created, the original version was longer, more complex, and even more graphically horrific.

By and large it is written from the perspective of the three main characters: the father whose wife and son were savagely murdered by the man who now has his daughter, Laura; the killer and child abductor who gains pleasure from the misery of children; and Laura herself, removed from everyone and everything she knows, all the while knowing she is at the mercy of a madman.

This became a better book with the graphically violent scenes removed, by streamlining, and also by bringing it up to date. Essentially I left it to the reader to fill in the blanks, for the characters to worm their way beneath the skin and, hopefully, to care.

Review Quotes
‘Made my skin crawl, gave me goosebumps and hairs that not only stand up but curl with the horror of the tale. The pages started to turn faster, my fingertips on fire. An emotional roller coaster? Yes indeed. Not many books have brought a tear to my eye (I'm a hard nut the crack) but this one did. Did I enjoy it? Ooooh yes indeed. Give me more Mr Forder.’

‘I went on a journey with Frank Rogers, with his determination to find his kidnapped daughter, and the killer of his wife and son, I cried for Laura and Frank.’

‘A dark and harrowing tale, brilliantly written by Tony J. Forder, who’s words are so descriptive, they paints pictures you’re not likely to soon forget... if ever!’

‘If I could have given this book more than five stars I certainly would. It is sensational and I think the best thriller I have ever read.’

‘It reminded me very much of the writing of Thomas Harris in its dramatic impact.’

‘This is an awesome read that for me that put it on a scare factor alongside Stephen King and Thomas Harris.  The heart breaking opening will make most readers just stand back and take a breath. Frightening, terrifying and imprinted on your mind for every time you say goodnight to your children before you double-check and triple check your doors are locked and bolted again.’

‘It is brilliantly written, without excessive gore – a mark of a true craftsman.’

‘I found this to be a compelling yet gruesome read. Great praise to this author. I'm looking forward to reading more from him.’