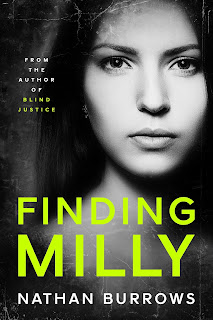 Jimmy Tucker is dying. There’s only one person he wants to tell. His daughter—Milly. But when he gets home from the hospital, she’s vanished without a trace.
The inoperable brain aneurysm deep within Jimmy’s head could burst at any time—a cough, a sneeze, or a blow to the head could kill him instantly. With the police not interested in Milly’s disappearance, Jimmy takes things into his own hands and begins to look for his only daughter. But it doesn’t take him long to realise that his daughter is not the woman he thinks she is.
As he gradually discovers Milly’s shocking private life, Jimmy enlists the help of Gareth Dawson, an ex-crook with a big heart. But Gareth can only help Jimmy up to a point.
As the pressure mounts, can Jimmy uncover the truth about Milly’s disappearance before it’s too late—for either of them?

Finding Milly is my first but certainly not my last read by this author. This was a great read. Some very likeable characters and others I didn’t like. The author hooked me with the mystery running through the story. The feelings I felt surprised me while reading it.

I’ll definitely be reading more from this author in the future. Great storyline  with interesting characters.

Nathan Burrows is a writer based in Norfolk in the United Kingdom.
Primarily a thriller fan, Nathan writes across the thriller genres – from legal thrillers like ‘Blind Justice’ to military thrillers like ‘Man Down’. He also writes more standard gritty thrillers like his latest release – ‘Finding Milly’.
He’s also the author of a dark comedy trilogy set in Norfolk. The first in the series is ‘The Butcher’, a deliciously funny story about – amongst other things – sausages. The second in the series is ‘The Baker’, which features Norfolk’s most useless cult. And finally, ‘The Candlestick Maker’ is about a fitness instructor with a difference.
Nathan’s a keen reader as well as a writer. He occasionally runs marathons, has a Norwich City football club season ticket, and is the proud part-owner of a Daschund puppy called Bertie.
For more information, visit www.nathanburrows.com