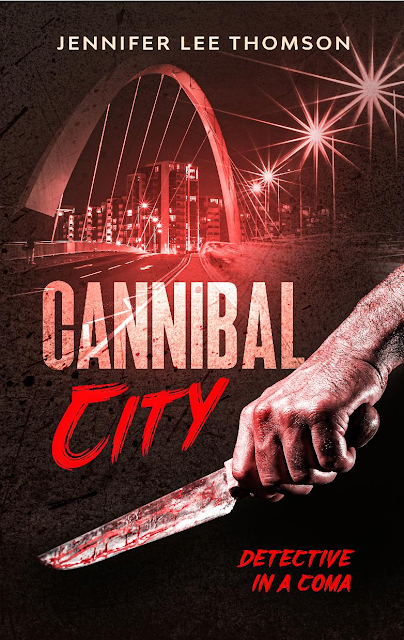 Cannibal City (Detective in a Coma #2) by Jennifer Lee Thomson

A killer is stalking his victims on Glasgow's streets.

Men are being abducted, kept tied up for weeks and force-fed, then strangled and their livers are being removed.

Detective Inspector Duncan Waddell has enough problems not least of all that his best friend and colleague Stevie who's meant to be comatose is talking to him and only him. Now he faces his most bizarre case yet.

This time he has help in the shape of FBI profiler Odessa Thorne who arrives as part of a new Police Scotland initiative.

When a career criminal comes forward to say he was targeted by the killer but somehow managed to get away, Waddell hopes it's the breakthrough they need. But can they trust this witness who's known to be a habitual liar?

As they close in on their ruthless killer Waddell must look into a heart of darkness to get his killer.

This is book two in the series and I highly recommend you read book one Vile City first.

There is a serial killer on the loose and DI Waddell is on the case. This series is different in that Waddell gets help from his colleague Stevie- who’s in a coma.

I really liked this storyline. The twists and turns had me glued to my kindle. Can’t  wait to read more from this author.

Jennifer is an award-winning crime writer (she won the Scottish Association of Writers Award for crime thriller Vile City, the first book in the Detective in a Coma series) and is a member of the Crime Writers’ Association. She studied creative writing at Strathclyde University. She’s also a feature writer whose work has appeared in The Guardian, The Times and Scotland On Sunday.

She wrote the Detective in a Coma (so called because the detective in the title is in a coma and only the lead character in the series DI Waddell can hear him) and the Die Hard for Girls series of books.

A human and animal rights advocate, she wrote Living Cruelty Free - Live a More Compassionate Life which focuses on how we can be kinder to animals and each other.

In her spare time, she loves going for walks with my rescue greyhound Harley and plotting the perfect murder.