At Your Door - blog tour 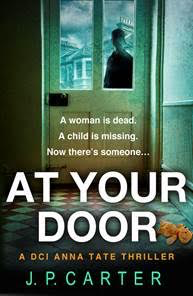 What happens when the past comes back to kill you?

When DCI Anna Tate is called to the gruesome discovery of a dead woman found on Barnes Common, she is plunged into a high‐profile investigation involving a prominent MP. London is baying for blood – but is there more to Holly’s death than at first meets the eye?

Meanwhile, the hunt is on for Anna’s missing daughter Chloe, who vanished ten years ago when her father kidnapped her. The case has been cold for what feels like forever – but a phone call brings a brand-new lead…

Can Anna solve the murder case whilst dealing with her own personal demons? Or is someone from the past planning to get in her way?

This is book two in the DCI Anna Tate series.

Anna is feeling the pressure to find out who killed a young girl who’s the daughter of an ex police commissioner.

We also get more of an insight into Anna’s missing daughter Chloe.

As much as I loved the first book I enjoyed this even more. Anna is a very likeable character and I’d have liked to read more about her personal life.
Both storylines running along side of each other worked well in the story.

A well told police procedural that I was gripped from start to finish. I’m looking forward to reading more from this author in the future.

J P Carteris the pseudonym of a bestselling author who has also written sixteen books under the names Jaime and James Raven. Before becoming a full time writer he spent a career in journalism as a newspaper reporter and television producer. He was for a number of years director of a major UK news division and until recently co-owned a TV production company.  For a while he was also a part-time professional magician. He’s married and divides his time now between homes in Hampshire and Spain.
Posted by Cheekypee reads and reviews at 04:54