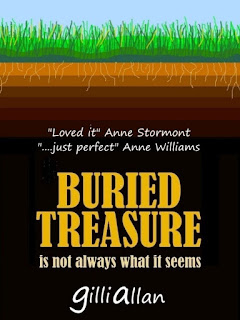 Buried Treasure
Their backgrounds could hardly be further apart, their expectations in life more different. And there is nothing in the first meeting between the conference planner and the university lecturer which suggests they should expect or even want to connect again. But they have more in common than they could ever have imagined. Both have unresolved issues from the past which have marked them; both have an archaeological puzzle they want to solve. Their stories intertwine and they discover together that treasure isn’t always what it seems.

Buried Treasure is a story told dedicated chapters from the alternate POV of the two main characters.

Jane Smith grew up in the shadow of her sister, Rachel, who is seven years older.  Feeling incapable of emulating her sister’s academic success, Jane left school at fifteen after her GCSEs, and has worked ever since, determined to plough her own individual furrow

Dr Theo Tyler is a lecturer in early Medieval History and Archaeology at Lancaster College (Cambridge).  As he is on a temporary contract - filling in for another lecturer - he has not been given a room of his own, and has been using the Philosopher’s Room.

Jane has recently set up her own business as an events planner, and is now on a day visit to Lancaster College with her assistant Emma, to scope it out as possible venue for her first big conference.  It is Easter vacation and the two women have been allotted the Philospher’s Room as their base for the day.  They have made themselves at home and, with time to wait before their first meeting, Jane is repainting a chipped toenail.

‘So, there was me, just scraping along at Saint Philomena’s, everyone - parents and staff alike - only too willing to rub my nose in what a popular all-round star my sister was, and why was I so rubbish, when Rachel got into Oxford. Always a bit of a know-all, she was instantly a gazillion times worse. All hoity-toity and totallyinsufferable, like she knew everything and we knew nothing!  I was embarrassed for Mum and Dad, but they fawned over her as if she was the oracle!  And from then on, the parade of cringe-making boyfriends...!’  Her finger to her mouth, Jane mimes retching, prompting a giggle from Emma. ‘They had to be seen to be believed. And they all had those god-awful Hooray Henrynames. You wouldn’t catch me going out with a...’ Sitting up straight and wiggling her toes, she assumes her best upper-class drawl. ‘A Hugo or a Quentin! …. Then to cap it all, she went and married a Miles! I was amazed by my parents’ acceptance of him.’
‘Apart from his name what’s wrong with him?’
‘He’s far older than Rachel, with one of those smoke and mirrors jobs that caused the 2008 crash. He’s previously married with two school age kids ... and with all the arrogance and air of entitlement you’d expect of a man from his background. I refused even to try to follow in my sister’s footsteps.’ Jane frowns down at her toenail; she can still see the paler triangular indentation. As she lifts her foot and props it on the edge of the table again, she is thinking about the stubborn certainties of her younger self, but it’s pointless regretting the decisions made back then.
She stoops forward holding the recharged varnish brush. ‘Wasting my time at university ... particularly a fusty, dusty old pile of stones like this one ... and coming home with my nose in the air and plums in my mouth was the very last thing Iwanted.’
Chapter 4

……………The old wooden treads creak as Theo turns at the first-floor landing and begins to ascend the next flight. ‘Getting back to the previous subject, I think it’s an interesting idea. I’m willing to consider anything to get my feet more firmly under the table here.’
‘If that’s the only reason you’re up for it...’
Theo glances back and smiles. ‘You’re joking.  Working with you, using Geographical Information Systems to model early medieval landscape? It’s an extremely exciting project. And it should tick some inter-disciplinary boxes for the college. We must talk more.’ He pulls the heavy brass key-fob from his pocket as he runs up the final steps. ‘They’ve yet to give me a room. Even Dennis Creech’s had been nabbed by the time I arrived.’
‘You have to have been here at least twenty years to be given a Set,’ Anthony says.
‘...Or from an approved clique and best pals with the right people. Think I’m viewed as a bit of an outsider....’
He was already aware of voices, but did not connect them to the Philosopher’s Room until he reached the landing. Now he sees the door isn’t shut and locked as he’d left it, but stands slightly ajar. And the volume has increased. Pushing the door open he sees the room is occupied; laptops are open on the tables in front of two women. One sits in a circle of crumbs, and the one speaking has her bare foot up on the table and appears to be painting her toenails.
‘...fusty, dusty old pile of stones like this one, and coming home with my nose in the air and plums in my mouth was the very last thing I wanted...’
The laughter from the nearest woman dies as she spots him in the doorway. Extraordinary arched brows arch even higher. She rises from her chair and simultaneously begins to choke, still gripping the half-eaten culprit. Crumbs fly from her mouth, joining those already clinging to the dark, tent-like layers of fabric she’s swathed in. There’s no point making a fuss.  These women must have been let in by a porter. They must be here in an officially sanctioned capacity. He is just the bozo who has to share this room with any Tom, Dick or Harry that the college is doing business with. Taking command of the situation, Anthony steps past him.

Author Bio –  Gilli Allan began to write in childhood - a hobby pursued throughout her teenage. Writing was only abandoned when she left home, and real life supplanted the fiction.

After a few false starts she worked longest and most happily as a commercial artist, and only began writing again when she became a mother.

Living in Gloucestershire with her husband Geoff, Gilli is still a keen artist. She draws and paints and has now moved into book illustration.

Currently published by Accent Press, each of her books, TORN, LIFE CLASS and FLY or FALL has won a ‘Chill with a Book’ award.

Following in the family tradition, her son, historian Thomas Williams, is also a writer. His most recent work, published by William Collins, is ‘Viking Britain’.