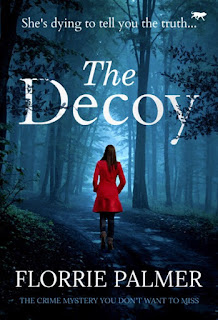 In the rural English village of Heronsford, Eliza and Jay Armstrong live in the farmhouse Eliza was brought up in. Her now elderly mother lives in a small converted barn close by.

Surrounded by friends, the Armstrongs appear to have an idyllic life. But when two members of their social group die in suspicious circumstances, a cloud falls over the village.

Are the deaths linked? And were they really accidents?

One of the first British female singer-songwriters, Florrie’s songs have been recorded by many including Abba blonde Agnetha Faltskog, Manfred Mann, Mike Rutherford of Genesis,
Elaine Paige and Sheena Easton. Her biggest hits were recorded by Sheena Easton who hit the number one spot in America for 6 weeks with 9-5 (Morning Train)resulting in a platinum record followed by a number 12 with When He Shines.
In 1994, Florrie wrote a comic novel based on her experiences in the music business called Never Final Till it’s Vinyl.
The Decoy is her first venture into crime fiction. She is currently writing her second. Having lived in various English counties as well as the south of France and Italy, Florrie now lives in Cambridge.

I do love a story set in a small village. This was well written  and enjoyable.

When a woman is found dead a whole lot of questions are asked.

This was a refreshing read from what I normally read. If you like cosy mysteries then this will be ideal for you.
Posted by Cheekypee reads and reviews at 10:20