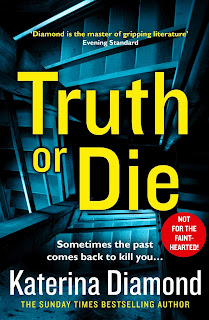 When Professor Hugh Norris is found brutally murdered at Exeter university, DS Imogen Grey and DS Adrian Miles turn to the students for answers. Who would target a seemingly innocent man – and why? Someone knows more than they’re letting on – and they’re playing a very sinister game.

A game so dark, it will shake the university to its core…

As another professor is found butchered and the death toll begins to rise, the police have to examine their own pasts to uncover the person behind the killings – before it’s too late.

But are they brave enough to face up to the truth?

The Sunday Timesbestseller is back in a twisty new novel, perfect for fans of M.J. Arlidge and Angela Marsons.

I really need stop jumping into series without reading previous books. Although this can be read as a standalone I do enjoy reading a series in order.

DS Imogen Grey and DS Adrian Miles are called to a university where a professor has been murdered.

Is his death connected with previous murders?

This is a brilliantly written gruesome  story. I highly recommend this story.

I’ll definitely be reading more from this author in the future and as I really liked DS Imogen Grey I’ll be wanting to read more about her.
Posted by Cheekypee reads and reviews at 15:25