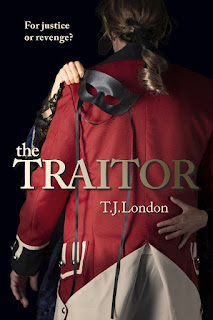 
Blurb:
Spy. Liar. Scoundrel. Redcoat.
Provocateur and spy for His Majesty, Captain John Carlisle returns to Fort Niagara with the secrets he stole in the arms of the beautiful Oneida innkeeper, Dellis McKesson. Determined to complete his mission and clear his name, he’ll see justice done—and damn the consequences. Now, he finds himself drawn into political intrigue as the British prepare to launch a three-pronged attack that will bring the Rebels and the Mohawk River Valley to its knees.

A dangerous revelation finds Dellis as whispers of intrigue insinuate her beloved is not all that he seems. Unwilling to wait for her lover’s return, she sets out in search of the truth as the Onieda begin negotiations with the Rebels, breaking the neutrality agreement with the crown. A bold move that will stoke a fire between the brother tribes and lead to a bloody inter-confederacy war—one Dellis predicted, and one John incited.

While war between the colonies and the King smolders, the punishing winter of 1777 allows the perfect opportunity for old enemies to settle scores, lying in wait, ready to exploit John’s one weakness—his heart. John is not an innocent man. The truth he’s long tried to hide from can no longer be ignored, the ghosts of the past seeking justice, and karma wanting payment for sins so dark they cannot be forgiven.


Author Bio:
T.J. London is a rebel, liberal, lover, fighter, diehard punk, and Mohawk rockinpharmacist-turned-author who loves history. As an author her goal is to fill in the gaps, writing stories about missing history, those little places that are so interesting yet often forgotten. Her favorite time periods to write in are first and foremost the American Revolutionary War, the French Revolution, the French and Indian War, the Russian Revolution and the Victorian Era.  Her passions are traveling, writing, reading, barre, and sharing a glass of wine with her friends, while she collects experiences in this drama called life.  She is a native of Metropolitan Detroit (but secretly dreams of being a Londoner) and resides there with her husband Fred and her beloved cat Mickey.

Posted by Cheekypee reads and reviews at 12:07