What Becomes of the Broken Hearted - blog tour 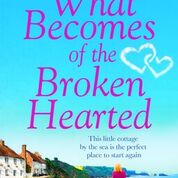 What Becomes of the Broken Hearted – Lisa Hobman

About the author
Lisa Hobman is a British author, living in Scotland with her family and two dogs. Her debut novel was shortlisted in the 2014 RoNA awards. When she’s not writing, Lisa can be found singing in a local band or out enjoying the beautiful Scottish countryside.

Cassie Montgomery can remember a time where her life seemed pretty perfect. By day she was setting up her own little business in her sleek penthouse apartment, and by night sleeping on gazillion-count Egyptian cotton sheets next to her fiancée, once reputed to be Glasgow’s most eligible bachelor.

And yet one ordinary, fateful day, Cassie uncovers a secret that shatters her heart into tiny pieces, and changes her life forever….

Escaping to a rural and idyllic coastal village, Cassie finds a cottage that, from the moment she steps through the rose-surrounded door, feels instantly like home.

And then there’s Mac, the cool surf teacher, who makes her question what really makes her happy – and makes her wonder if maybe, she might already have found the answer….

Posted by Cheekypee reads and reviews at 00:26