The Quiet Ones - blog tour 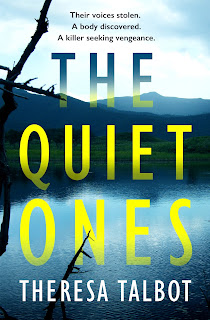 About the book
If only someone had listened...
When the supposed suicide of famous Scottish football coach Harry Nugent hits the headlines, the tabloids are filled with tributes to a charitable pillar of the community that gave so much back to sport and to those less fortunate.
But something isn't right. Normally celebrities are queuing up to claim to have had a very special relationship with the deceased, but investigative journalist Oonagh O'Neil is getting the distinct impression that people are trying to distance themselves from Harry.
Oonagh's investigation leads her to uncover a heartbreakingly haunting cover-up that chills her to the core... and places her in mortal danger from those willing to protect their sadistic and dark secrets at any cost...
Perfect for fans of Patricia Gibney, Angela Marsons and Cara Hunter

2
DI Alec Davies looked at the body hanging from the oak framed timber balcony and knew he had a major headache on his hands. Harry Nugent was one of the biggest names in Scottish sport, and the Major Investigation Team would be all over this one like a rash. Davies had passed Nugent’s wife on his way in; still sitting in the back of a squad car. The flashing lights of the police cars and ambulance shone through the windows, the light catching on Harry’s eyes, which were still open. His wife had come home around tea-time and found him. Thought initially it was suicide and ran screaming from the house before calling 999. No one had bothered coming out to see what was wrong. It wasn’t that sort of neighbourhood. Davies wondered whether they’d heard Harry’s screams and ignored them too. It was only when blue flashing lights appeared that a few heads bobbed out from behind the cedar gates.
When the paramedics had arrived on the scene it had quickly become obvious that Harry Nugent had been murdered, or at least the death was considered ‘suspicious’. Very few suicide victims had lesions around their wrists and ankles, and even fewer had their tongues cut off and stuffed down the back of their throats.
The police casualty surgeon had long gone, hadn’t taken too much time to pronounce life extinct at the scene. Davies guessed most people would have been able to tell this poor sod was a goner with or without a medical degree. The body was fully clothed – well, almost; one slipper dangled from his right foot, brown leather slip-ons, the other had fallen on the floor. They looked as though they’d cost more than Davies’s monthly mortgage repayment. Hellish little good they’d be doing him now.
DS Toria Law came through the front door. The house had been cleared as soon as it had become obvious that it was a crime scene. She was covered from head to foot: white paper overalls, hood up, covering the small cap her hair was tucked underneath, double latex gloves, disposable shoes and a face mask. Only her eyes were visible through the Perspex goggles. She looked like a kid as she nodded over to him, her eyes quickly taking in the scene. This was only her second time as a crime scene manager, but she was turning into a good copper. Davies knew he was in safe hands and left her to it.
Outside the quiet residential street had been cordoned off, with two police cars parked in a ‘V’ shape, stopping any vehicles entering or leaving. This was an area unused to flashing blue lights or the camera crews that Davies could see were now gathering at the foot of the cul-de-sac.
Nugent’s wife was curled up in the back of the car. Frizzy blonde hair sticking out from the top of the grey blanket she’d been wrapped in. Even from this distance, he could see she was shaking. McVeigh sat opposite her, seemed to be nodding in all the right places, no doubt reassuring her that it was just routine that they’d need DNA swabs. He eased himself out of the car, leaving the grieving widow when he saw his boss.
‘What’s she still doing here?’ Davies looked at his watch. Nugent had been dead for the best part of three hours now.

Theresa Talbot is a freelance writer, journalist and radio presenter, perhaps best known as the voice of Traffic and Travel on BBC Radio Scotland and as the host of The Beechgrove Potting Shed. Prior to working with the BBC she was with Radio Clyde and the AA Roadwatch team. Theresa worked in various roles before entering the media as an assistant in children's homes, a Pepsi Challenge girl and a library assistant. She ended up at the BBC because of an eavesdropped conversation on a no.66 bus in Glasgow. Her passions include rescuing chickens, gardening, music and yoga.
Follow Theresa:
Facebook: @TheresaTalbotBooks
Twitter: @Theresa_Talbot

Posted by Cheekypee reads and reviews at 03:01