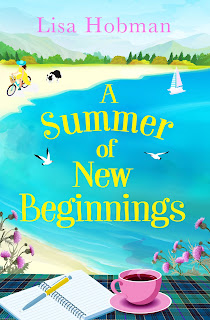 Lisa’s debut novel was shortlisted in the 2014 RNA. Her stories centre around believable, yet down to earth characters and the places in Scotland she has visited and fallen in love with. She is a happily married mum of one with two energetic dogs.
Follow
Twitter: @LisaJHobmanAuth
Facebook: @LisaHobman

About the book
The stunning new story from the bestselling author of What Becomes of the Broken Hearted. Perfect for fans of Lucy Diamond, Sarah Morgan and Holly Martin.

Meet Zara Bailey, a travel writer paid to cover some of the globe’s most luxurious locations.

Zara knows hers is the definition of a dream job! So she is seriously shocked to receive her next assignment; Scotland’s Northcoast 500 route. By bicycle. Sleeping in a tent so basic it can’t remotely be dressed up glamping! But this could be just the distraction the recently heartbroken, Zara needs. No men, no romance, just the breathtakingly rugged Highland scenery.
Until she meets croft owner Lachlan Grant, and his black and white Border Collie Bess, that is….

As she stared out of the small aeroplane window, Zara Bailey smiled. She was thousands of feet up in the air and the clouds were the thick, fluffy white of meringue. But instead of being topped with fresh, exotic fruit like that she’d had in the past five days, they were tinged with the honey-gold rays of the descending sun. The thought of food made her stomach rumble and she realised she’d been so late getting to Miami International airport that she hadn’t had the chance to grab a bite to eat.Although she couldn’t complain really. The stateside trip had consisted of an abundance of rich food, from Cuban to Mexican and everything in between. She
would have to watch herself or her next trip wouldn’t include that pretty bikini she had bought from her favourite designer boutique. There had been a tad more alcohol than she usually drank on a business trip but she’d got caught up in the whole atmosphere: the cocktails; the weather; the music; the people. She’d been well and truly sucked in. It was at times like this that she couldn’t imagine working anywhere
else than The Bohemian magazine.

Travelling the world had been something she had dreamed of all her life, especially when things at school had got to be too stressful. She had lived an imaginary life in atlases and travel journals, creating scrapbooks listing the places she would one day visit. She had been one of the intelligent kids; the nerds. She’d never been invited to parties with the popular crowd, nor had she gelled with the misfits. She’d been in a
category apart and there had been only a few other occupants – a couple of whom had been tolerable and become friends. Her best friend at school, and the only person she’d kept in touch with since, was Michelle Bean. Apart from their intelligence they had another thing in common: they had both been ribbed by the cool kids – Shelley for her name and Zara for her cheap, often second-hand clothes and her spectacles that had enlarged her denim-blue eyes. The two had become known as Granny Bailey and Jelly Bean.

They couldn’t wait to leave.
Zara’s parents had given up on trying to improve her high-school experience and had resorted to telling her, ‘One day, Zara, you’ll show them. One day when you’re a
rich and famous journalist on TV shows they’ll regret ever teasing you.’ She’d hoped they were right but hadn’t been about to hold her breath. A couple of last-minute-deal package holidays to Spain with the family hadn’t quite matched up to the dream she had and so the world had remained a mystery she was desperate to solve. It was only after university when she’d landed a job as luxury travel writer with the prestigious magazine that ‘showing them all’ had looked like a possibility; although she had never been presented with the opportunity to make good on it.
Until now.
When the silver envelope had landed on the doormat of her two-bedroomed Peckham pad she had opened it with intrigue. But on seeing the invite contained therein she had stared at it in disbelief. The words New Malden High Sixth Form Class of 2008 Reunion screamed at her in shiny, Arial bold font from the card and a shiver of dread manifested itself in a funny little squeak from her throat. Memories of
herself and Shelley in lower sixth form, being shunned and, worse still, laughed at and taunted, returned to torment her.
Perhaps she should say she was unavailable. After all, she hated school and most of the people she had attended with, so why the hell would she want to meet up with
them now, after all this time when her life was finally on track?
Then it dawned on her twenty-seven-year-old self. She’d bloody well earned her bragging rights. And what were these events if not to show off and tell everyone how
well you’ve done for yourself? And to have pissing contests about who’d achieved the most amazing things since leaving school? And let’s face it, I’ve done pretty bloody well.
After graduating from university with a first-class degree in Journalism she had landed her job as one half of the travel-writing team at one of the UK’s top mags,
based in central London. Her opposite, Dillon, was the adventure and outdoors writer – a job that she couldn’t imagine doing for all the tea in China. She’d finally got to
travel the world and, not only that, she’d stayed in many of the top hotels too. She had so much of the world left to see and she was excited to discover where her job might take her next.
Maybe the reunion would be a great way to stick two fingers up at the so-called popular kids – many of whom, she expected, had amounted to a great big nada. It
wasn’t the best reason to go but it was a reason. She resolved to think about it. She had Miami to focus on. And so that was it, the invitation remained on the mantelshelf
above her modern, state-of-the-art, feature electric fire whilst she went off to write about the city at the southern tip of the sunshine state.