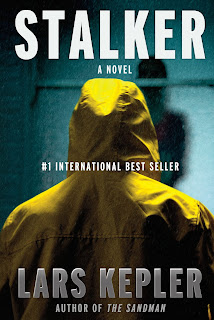 The internationally bestselling authors of The Sandman and The Hypnotist return with a
terrifying new thriller: Detective Joona Linna--recently returned from compassionate
leave--reunites with hypnotist Erik Maria Bark in a search for a seemingly unassailable
sadistic killer.
The Swedish National Crime Unit receives a video of a young woman in her home, clearly
unaware that she's being watched. Soon after the tape is received, the woman's body is found
horrifically mutilated. With the arrival of the next, similar video, the police understand that the
killer is toying with them, warning of a new victim, knowing there's nothing they can do.
Detective Margot Silverman is put in charge of the investigation, and soon asks Detective Joona Linna for help. Linna, in turn, recruits Erik Maria Bark, the hypnotist and expert in trauma, with
whom Linna's worked before. Bark is leery of forcing people to give up their secrets. But this
time, Bark is the one hiding things.
Years before, he had put a man away for an eerily similar crime, and now he's beginning to
think that an innocent man may be behind bars--and a serial killer still on the loose. . .

“The reveal of the stalker’s identity is a genuine gut-punch. . . . Kepler (the pen name for the
husband-and-wife writing team of Alexander and Alexandra Ahndoril) does a masterly job of
elevating the serial killer thriller beyond genre clichés and tropes.” — Publishers
Weekly (starred review)

Kepler delivers a page-turning hunt for an expertly camouflaged killer that draws shocking
connections between the hallowed halls of the Karolinska Institute, Stockholm’s prostitution and
drug scene, and Sweden’s rural churches. The author’s dark, complex procedurals are must-reads
for readers drawn to Stieg Larsson, Mons Kallentoft, and Michael Connelly.” –Booklist (starred
review)
“An intricate plot and escalating tension set the stage for this tense, clever, pulse-pounding
thriller. A must for fans of Stieg Larsson.” —J.D. Barker, international best-selling author
of The Fourth Monkey
“Dark, complex, and chillingly intelligent, Stalker hooks you on page one and never relents. Lars
Kepler’s vivid, visceral thriller had me holding my breath to the last page.” —Meg Gardiner,
Edgar-winning author of UNSUB and Into the Black Nowhere

This is book five in a series but like I have done it can be read as a standalone.

This is a brilliant read. Although a big read I found myself reading ‘just one more chapter’. When I had to put it down I found myself looking forward to going back to read it. It was such a great read.

Stalker is one of those reads that I couldn’t predict what was gonna happen next.

If your looking for an action packed thriller then I highly recommend you read this gem. I’m looking forward to reading more from this duo in the future.

LARS KEPLER is the pseudonym of the critically acclaimed husband and wife team Alexandra
Coelho Ahndoril and Alexander Ahndoril. Their number one internationally bestselling Joona
Linna series has sold more than twelve million copies in forty languages. The Ahndorils were
both established writers before they adopted the pen name Lars Kepler and have each published
several acclaimed novels. They live in Stockholm, Sweden. Translated by Neil Smith.
Author Website: http://larskepler.com/
Author Facebook: https://www.facebook.com/larskepler/
Author Instagram: https://www.instagram.com/larskepler/

Posted by Cheekypee reads and reviews at 23:01