From Mum with Love - blog tour 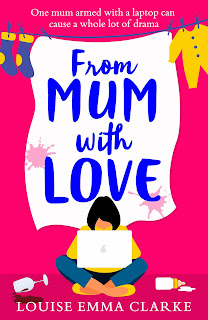 From Mum With Love by Louise Emma Clarke

About the book
Full-time mum Jess has had enough, and her husband, Chris, has just the
solution to vent her frustrations – a blog.
Jess loves her daughter more than anything, but sometimes she just wants a
little bit of freedom – some time for herself. Queue a laptop, a glass of wine
and the beginning of a life-changing journey.
Overnight Jess's inbox is full of notifications and before long she is officially a
'mummy blogger' but this new life comes with its own set of rules and
regulations. With Queen of the Bloggers, Tiggy, blanking her in public, people
recognizing her on the street and her life decisions suddenly judged by
strangers Jess's idea of 'me time' is slowly becoming a full-time job.
Will Jess be able to find the right life/work balance? Or will she wish she'd
never turned to a world online?

But she did love to write and she thought, possibly, she might even be quite good
at it. She would just stick to writing letters to Bella, telling the story of how
motherhood happened for her.
She felt comfortable with that. It felt right.
And even if she wasn’t quite ready to send it out into the world just yet, that was
the moment she knew she was really going to do it. Sat at her laptop, with her
notebook in her hand, and memories of early motherhood drifting in and out of her
mind.
But first, dinner.
‘You ready, honey?’ Chris asked, loosening his tie as he walked into the lounge.
‘Yep, let me just grab my lipstick,’ Jessica replied. ‘Where’s Mum gone?’
‘Chatting to your dad on the phone in a very loud whisper, but all quiet from Bella
Boo. We can escape as soon as you’re ready.’
Jessica smiled at her husband, as he pulled off the tie and undid his top button. She
didn’t often stop to look at him any more – really look at him – but standing in front
of her now, he was very definitely still the man she fell in love with that first night in
the bar. She, on the other hand, looked vastly different. As she smiled at him, her
hand subconsciously skimmed her stomach.
‘You look beautiful,’ Chris said, reading her mind. ‘Is it a new dress?’
‘Oh this? No, I’ve had it for years,’ Jessica replied, looking down at the black shift
dress that fell past her knees. ‘But thanks, birthday boy!’
She walked towards him and kissed him on the lips, before unhooking her handbag
from the banister at the bottom of the stairs to find her lipstick (that pre-baby handbag was so rarely used these days, it was always a packed nappy bag that she dragged around with her).
Standing in front of the mirror in the hallway, she painted the cherry red hue
carefully onto her lips, pursed them, and applied another layer. After checking her
teeth, she stood back and admired her reflection.
‘Right, I’ll just say goodnight to Mum. Is the cab outside?’ she asked, making her
way to the kitchen.
‘Yes, just arrived,’ Chris replied.
And two minutes later, they were pulling the door quietly behind them and making their way to the kitchen.
‘Yes, just arrived,’ Chris replied.

Jessica had made Chris promise he wouldn’t be late home from work on his
birthday, and although she’d been hoping he’d make it back in time to kiss Bella
goodnight, she was thankful they wouldn’t miss their 8 p.m. dinner reservation. She’d
bathed Bella, got her to sleep, and managed to escape back downstairs ahead of
schedule. And, just as she finished typing the letter, which she’d started during
Bella’s naptime that afternoon, Chris had walked through the door. Her mum had
arrived minutes later to babysit. Everything was set for their date.
It was a treat to be heading out on a Monday evening, especially as Chris had
chosen their favourite Argentinian restaurant in Blackheath. It would be just like old
times when they used to stroll to the restaurant hand-in-hand, feeling like two
lovestruck teenagers – except this time, they’d be bleary-eyed from a broken night of
Bella standing up in her cot and screaming at the injustice of being behind bars.
It wasn’t until their starter arrived that Jessica decided to bring up the blog. ‘So I
typed up the first letter…’ she said, pushing her chilli prawns around the plate with
her fork.
‘Really?’ Chris replied, taking a sip from a wine glass nearly as big as his head.
‘So you’re going to do it?’
‘I think so. Even if nobody else reads them, the letters will be safe for Bella when
she’s older. And I get to keep my notebook…’ Jessica winked.
Chris smiled. ‘I’m pleased, honey. I think it’s going to be a big success.’
‘I’m not sure about it being a success, but I’m going to enjoy sitting down when
Bella is asleep and typing them up – and it gives me an incentive to keep going when
I finally catch up,’ Jessica continued.
Chris nodded. ‘You’ve always wanted to write, and you’re bloody good at it’!

About the author
Louise's blog, Mum of Boys and Mabel has over 100k followers. Having
moved to Dubai with her family she's now back in the UK and is enjoying
writing. From Mum with Love is her debut novel.