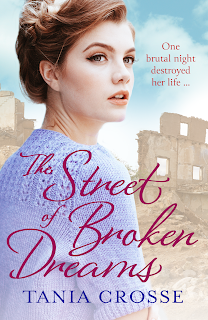 About the author
Delaying her childhood dream of writing historical novels until her family had grown up, Tania eventually completed a series of published stories based on her beloved Dartmoor. She is now setting her future sagas in London and the south east.

About the book
A poignant story which will tear at your heart strings. Perfect for the fans of Elaine Everest and Daisy Styles.
Summer 1945. The nation rejoices as the Second World War comes to an end but Banbury Street matriarch, Eva Parker, foresees trouble ahead. Whilst her daughter, Mildred, awaits the return of her fiancé from overseas duty, doubts begin to seep into her mind about how little she knows of the man she has promised to marry. Or are her affections being drawn elsewhere?
Meanwhile, new neighbour, dancer Cissie Cresswell, hides a terrible secret. The end of the conflict will bring her no release from the horrific night that destroyed her life. Can she ever find her way back? Under Eva’s stalwart care, can the two young women unite to face the doubt and uncertainty of the future?

As she’d turned the corner and began to walk past the bomb site, for once, she hadn’t feared the eerie tentacles of the dead that seemed to reach out for her in the dark. The grandiose, emotive tones of Wagner’s Overture to Tristan and Isolde rang once more inside her skull, filling her head so that there was room for nothing else.
The new, much-heralded pas de deux had been a triumph, the tumultuous applause reaching into her soul. This was what she had dreamt of, strived so hard for, all of her young life. Her male principal dance partner, Sean, had smiled at her so proudly as he had shown her off to the audience, standing back with a slight bow as she dipped in a curtsey again and again. The stiff netting skirt of her tutu had bobbed up and down as she accepted the bouquet that was presented to her and picked up the individual flowers that were thrown onto the stage.
The enchantment of the intertwining of music and ballet, her most beloved form of dance, still burned in her heart as she made her way home, the magic rising like a fountain in her breast and lifting her soul to some mystical heights. The street and the darkness melted away and her very being was lost in some other place where grace and movement reigned.
She wasn’t sure how or when the sensation came over her that she was being watched, dashing her other world to smithereens. Only seconds later, she began to hear footsteps behind her. Was she being followed? She quickened her pace, heartbeat suddenly racing. It was probably just some innocent passer-by, someone she knew even, hurrying home. But she didn’t like the way the footsteps were speeding up, getting closer.
She forced herself to turn her head but without slowing her pace. She was shocked and alarmed to make out the form of what could only be the drunk GI lumbering after her. Though he didn’t seem so drunk now. He was a big man with a long stride, and though he was unsteady, he was gaining on her.
‘Leave her be, Chuck!’
She saw the other one, then, loping along some way behind, bent double and clutching his stomach as if he’d been on the end of a hefty punch.
‘Ya know I like a bit of spirit in a girl!’ the first soldier roared in reply. ‘It’ll be fun having her, and ya ain’t going to stop me!’
‘Run, miss, run!’ the second soldier called out with a gasp as he tried in vain to catch up.

She didn’t need telling twice. She turned her head forward again and fled. She knew she was fleet of foot, fast, her muscles strong. The devil would never catch her!
The gap was widening as she flew along now past the bomb site, and soon she’d be among the labyrinth of narrow backstreets she knew like the back of her hand. She’d lose him in seconds. He’d never be able to follow her in the blackout, and she’d be safely indoors, leaving him lost and defeated in the dark.
Nearly at the surviving houses, heart thundering, breath burning in her lungs, her foot caught on a paving slab that had been cracked and lifted in the bombing raid that had obliterated the street. She felt herself falling, but it happened so quickly and she couldn’t stop it. She put out her hands, but pain seared through her ankle before she made contact with the pavement, her palms stinging as they slapped on the ground.
She knew the man would be on her in a trice. She had to get up and run on. She tried desperately to scramble to her feet, but the agony scorched up her leg and into her head. A sickening dizziness clouded her consciousness and darkness closed in.