Diary of a Mermaid - blog tour 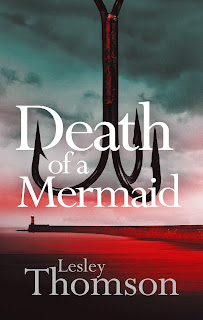 Death of a Mermaid – Lesley Thomson

Lesley Thomson grew up in west London. Her first novel, A Kind of Vanishing, won the People's Book Prize in 2010. Her second novel, The Detective's Daughter, was a number 1 bestseller and sold over 500,000 copies. Visit her website at

Freddy left her childhood home in Newhaven twenty-two years ago and swore never to return. But now her parents are dead, and she's back in her hometown to help her brothers manage the family fishmonger. Nothing here has changed: the stink of fish coming up from the marshes; the shopping trolleys half-buried by muddy tides; the neighbours sniffing for a new piece of gossip.
It's not what Freddy would have chosen, but at least while she's here she'll get to see her childhood best friends, Toni and Pauline. At school, the three of them were inseparable. The teachers called them the Mermaids for their obsession with the sea, and with each other.
Then Pauline goes missing, and Freddy must decide. Go back to her new life, or stay and find her friend?

Buffeted by the wind a woman picked her way down the cliff path. A sign on the shingle ridge warned, ‘No safe access beyond this point’. Icons showed four kinds of danger. Falling rocks, slippery surfaces, rocky foreshore and deep water with high tides.
The sun had set, the sky towards Shoreham was washed pink.
Four dangers. What is the fifth danger? Or who?
The grille across the entrance to the battery was open. The woman  had to look twice to be sure. All her life it had been barred. The Mermaids used to scare each other making up what lay within. They knew the layout from history lessons. Gun chambers off a passage, apertures facing the sea. They’d imagined a skeleton on a heap of ammunition that was used to fire at Napoleon’s ships. He would be a lovelorn soldier who’d killed himself and was never found.
At first the tunnel was pitch black, but bit by bit the woman orientated herself and shapes resolved into doorways into the chambers.
As fast as this vision excited her, it dissipated. She felt the enormity – a plummeting realisation – of her mistake. She was no longer seventeen and in love. The gravelly trawl of the sea ground into her thoughts. If she left now, she’d be caught.
Swiftly, silently, she pulled shut the grille behind her. The padlock hung loose, but in the dusk it would not be obvious that it was unlocked.
She groped back down the tunnel. The walls were wet, not with seawater or rain, neither would penetrate into the heart of the cliff. It was the slime of centuries. She clutched her crucifix and made herself retreat to the end of the tunnel. She hid in the furthest cell. The light was dwindling, the shape of the gun sighting blurred. It was as if reality had retreated with her.
She had come to redress sins. Instead she was skulking in a tomb with her secrets. She crossed herself.
She felt a warm grip around her neck. She tried to shout. Something was stuffed in her mouth. She went to prise off the fingers, but snatched at nothing. She fought blindly, kicking, unable to slither out of the iron-like grasp. Whatever was in her mouth blocked her nose. She heaved for breath but her lungs found no air.
‘Where is it?’ A grating question like the shingle dragged by the waves.
She had vowed to be unafraid of death. When her time came, she would welcome Jesus. Except…
Not now… not yet…