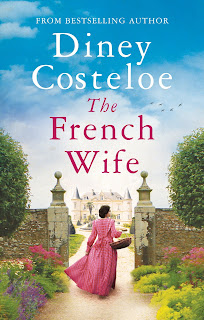 The French Wife by Diney Costeloe

Please note the new publication dates above due to the pandemic.

As the St Clair family prepare for the grand wedding of their daughter, Clarice, trouble is brewing. An old friendship, a new love and a dangerous secret threaten to destroy the life the St Clairs have built.
Their younger daughter, Hélène, became friends with orphaned Annette during the terrible events of the 1871 siege of Paris. Now they are reunited, with Annette working below stairs for Hélène's parents. But she is hiding a dangerous secret, which Hélène has promised to keep at all costs.
Meanwhile, Hélène has begun to fall in love with a young nobleman from England, whose family has plans which do not include their son choosing a French wife.

Once the funeral was over, Father Thomas took over the parish, the Clergy House and the lives of the two women who looked after him. Madame Sauze continued as housekeeper, assisted by Annette, the orphan she had rescued some years earlier, with Father Lenoir’s blessing, from St Luke’s orphanage to train as a housemaid. The young priest was determined to show his bishop that he was perfectly capable of running the parish, and the bishop, taking the easy route, made no move to appoint a new, more experienced parish priest. For a while Father Thomas’s future hung in the air, but after several weeks he was summoned to the bishop’s office and told that for the present, at least, he was responsible for the parish. He was no longer a curate, but a parish priest with responsibility for a church, a congregation and the souls of men. A person of importance.
Thus established in his position, the young priest called Agathe Sauze into his study and told her that he no longer needed her services.
‘The girl, Annette, is perfectly able to look after me here. It doesn’t take two women to look after the simple requirements of a priest.’
Simple requirements of a priest! Apart from the general keeping of a house, Agathe thought of the large meals Father Thomas consumed without comment; the spotless vestments she was expected to provide for the church services. With Father Lenoir that had been a privilege, her pride in his pristine appearance always appreciated with a smile of recognition or word of thanks. She received no such acknowledgement from Father Thomas. Would young Annette, aged only about eighteen, be able to cope with the demands of running the Clergy House and looking after the daily needs of its incumbent? It would not be easy.
Agathe looked him firmly in the eye. ‘So, you’re throwing me out into the street,’ she said flatly.
‘Certainly not,’ snapped Father Thomas. ‘You are getting old and I am releasing you so that you may retire.’
‘But I don’t want to retire.’
‘That’s your problem, madame, not mine. I no longer require your services. You must be out of this house in two weeks’ time.’
‘But I have nowhere to go.’ Agathe heard the dismay in her voice and struggled to hide it.
‘Which is why,’ Father Thomas replied smugly, ‘I am giving you two weeks to find somewhere. It’s the Christian thing to do.’
Agathe returned to the kitchen to break the news to Annette. Over the years she had become fond of the girl. She had taught her to cook and clean properly and in the evenings she had taught her to read and write. At first Annette had dismissed ‘book learning’ as a waste of time, but Agathe had insisted and as she came to grips with it Annette realised that it wasn’t that difficult and discovered a whole new world in the few books Agathe had to offer her.
‘You never know when such learning may come in useful,’ Agathe had said, ‘and in the meantime you can enjoy reading.’ And Annette found that she did.
Now, when Agathe told Annette what the priest had said, the girl turned pale.
‘You can’t leave me with him,’ she cried. ‘Madame, don’t leave me with him.’
Agathe smiled ruefully. ‘Annette, I can’t take you with me, I’ve nowhere to go. At least you will have a roof over your head and food on the table.’ It was the best she could offer. She was well aware that if she took Annette with her and both of them became vagrant, the girl could well end up on the streets, selling her body to keep herself alive. ‘I looked after Father Lenoir for nearly thirty years, and in that time we learned to get along. You’ll get used to Father Thomas’s ways and find that you rub along together.’
Alone in her room she considered her options and found they were very few. She was only sixty but she knew it would be difficult to find another place. No one would want to employ an elderly woman who might become infirm, when they could get someone so much younger with years of work left in her. Who could she turn to? Briefly she thought of Madame Rosalie St Clair.

Diney Costeloe is the author of twenty-three novels, several short stories, and many articles and poems. She has three children and seven grandchildren, so when she isn’t writing, she’s busy with family. She and her husband divide their time between Somerset and West Cork.