EXCERPT REVEAL
Excerpt:  Killer meets Britt
The girl, Britt, is moving around the small space, clearly at ease with her surroundings. She opens a laptop and sits at a desk wedged in one corner. “You can sit.” Britt points to a second chair.
Good. For a second I thought I was going to be forced to get up on the treatment table. I’m not in the mood to be a guinea pig today.
That’s a lie. I don’t really care what the trainers or specialists do to me as long as they make me a better fighter. It’s the girl that bothers me, not the thought of being under a microscope. This is the only woman I’ve ever met who isn’t instantly and irrevocably afraid of me, and the only one whowho has me tempted into thinking I could have more. More than a filthy, dirty fuck to release tension. More than someone to use for a few hours of pleasure.
Britt’s obviously already damaged. As much as I’d love to peel back those layers, I don’t want to give her a chance to dig out my own psychological scars, the nightmares hidden beneath a baggy hoodie and a cold stare. If I do, Britt may never recover from what she finds.
“I’m sorry,” she apologizes, tapping on her computer. “I only found out you were coming last night, so I don’t have much information and haven’t reviewed your medical file.”
She’s so quiet, I strain to hear her. When I don’t respond, she cocks her head and her eyes flick up to mine. Shit. I duck down so she can’t get a good look at my face.
Fucking coward. She’s going to find out at some point, idiot. Why delay the inevitable? She’ll see the same thing everyone else sees when they look in my eyes… nothing, a monster, a killer.
For the first time in ten years, the thought disturbs me.
Ten years ago, their lives shattered to pieces...
And he's the KILLER that has to live with it.
Two people. One incident.
Interwoven between two damaged souls in ways they don't understand.
#DarkRomance #Fighter
PRE-ORDER NOW
Amazon US: http://amzn.to/1pzIVhn
Amazon UK: http://amzn.to/1QHdJ8O
iBooks:  http://apple.co/1UDgxH5
Kobo: http://bit.ly/1UVTCHf
Enter to win a Kindle Fire here: http://bit.ly/21Lr7xK
RELEASE DATE: March 15th
Blurb
Ten years ago, their lives shattered to pieces...
And he's the KILLER that has to live with it.
Two people. One incident. Interwoven between two damaged souls in ways they don't understand.
But now, they must fight the same war--a past that wrecked them both--destroyed the two people they used to be. With a hurricane of love, hate, anger, fury, and fear, can two broken lives find a way to let it all go for a chance at happiness?
About the author
Heather C. Leigh is the author of the Amazon best selling Famous series. She likes to write about the 'dark' side of fame. The part that the public doesn't get to see, how difficult it is to live in a fishbowl and how that affects relationships.  Heather was born and raised in New England and currently lives outside Atlanta, GA with her husband, 2 kids, and French Bulldog, Shelby.  She loves the Red Sox, the Patriots, and anything chocolate (but not white chocolate, everyone knows it's not real chocolate so it doesn't count) and has left explicit instructions in her will to have her ashes snuck into Fenway Park and sneakily sprinkled all over while her family enjoys beer, hot dogs, and a wicked good time.
Stalk Her: Website | Facebook | Twitter | Goodreads 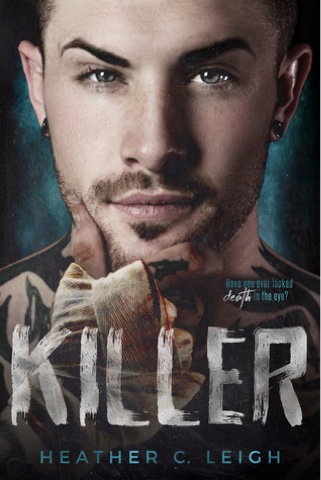 Posted by Cheekypee reads and reviews at 13:59