You Belong to Me - blog tour 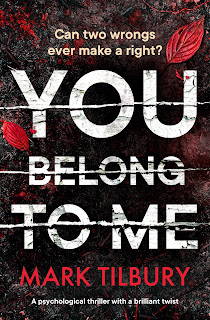 Book blurb:
Can two wrongs ever make a right?
The police never found fifteen-year-old Ellie Hutton. She vanished ten years ago after walking home from school along a disused railway track. But Danny Sheppard knows exactly what happened to her. She is dead and buried in a field near Lassiter’s Brook.
Now Cassie Rafferty has gone missing. Same age. Similar circumstances. And Danny also knows what has happened to her.
Can Danny fight his demons and tell the truth this time?
Or will history repeat itself and leave another innocent girl dead?

I’ve only read one previous book by this author and after reading this I really must read more of his previous books as this was so good.

We are introduced to Danny who gets in touch with three of his childhood friends. I kept asking why? None of them has had an easy life but what’s troubling them so much. Has it got to do with the disappearance of two girls, ten years apart.

This author has given us a well written chilling read that hooked me from start to finish. Once I started I didn’t want to put this down. Such a great read.

About the Author:
Mark lives in a small village in the lovely county of Cumbria, although his books are set in Oxfordshire where he was born and raised.

After serving in the Royal Navy and raising his two daughters after being widowed, Mark finally took the plunge and self-published two books on Amazon, The Revelation Room and The Eyes of the Accused.

He's always had a keen interest in writing, and is extremely proud to have had six novels published by Bloodhound Books, including his most recent release, You Belong To Me.

Posted by Cheekypee reads and reviews at 23:09