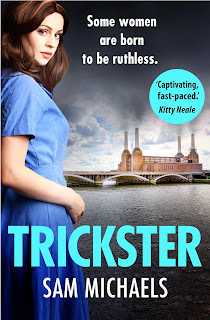 To be ruthless is to be powerful, at least it is on the Battersea streets...

Georgina Garrett was born to be ruthless and she’s about to earn her reputation.

As World War One is announced a baby girl is born. Little do people know that she's going to grow up to rule the streets of Battersea. From a family steeped in poverty the only way to survive is with street smarts.

With a father who steals for a living, a grandmother who’s a woman of the night and a mother long dead, Georgina was never in for an easy life. But after a tragic event left her father shaken he makes a decision that will change the course of all their lives – to raise Georgina as George, ensuring her safety but marking the start of her life of crime…

This is the first book in the thrilling new Georgina Garrett series.

London, Battersea, 5 August 1914
Sissy Garrett doubled over in agony as another contraction ripped through her skinny body. She grabbed hold of the butler sink for support, panting hard as beads of sweat formed on her pallid skin.
‘Gawd help me,’ she ground out through gritted teeth, and rubbed the under part of her hugely swollen stomach. Her violet eyes were wide with fear and her heart-shaped face was contorted in pain. At twenty-two, this was her first child, and it had been long waited for.
She looked down at the puddle of water that was seeping through the worn floorboards. Her contractions had come on quickly and taken her by surprise. Now, as she stood in the small, shared scullery, her heart hammered in panic. Mr and Mrs Linehan lived upstairs with their toddler, but Sissy knew they were out. Alfred Linehan would be working, running errands on the streets, and his wife, Lillian, had said she was going to stay at her sister’s for a few days.
Sissy was all alone, on the cusp of giving birth, and silently cursed Jack again. Her husband frequently did a disappearing act and came and went as regularly as the tide on the Thames. She’d often tell him he was as much use as a chocolate fireguard, and on several occasions his petty thieving had failed to pay the rent. This would leave her having to hide from the landlord in the cupboard under the stairs. Still, she loved Jack dearly, and prayed he would come home soon.
She slowly walked across the scullery as cockroaches darted for cover. With just one cold tap and a range stove in the room, there wasn’t a table or chair available to steady herself. Discoloured wallpaper hung off the walls and hand-washed, ragged clothes were draped over a makeshift washing line that ran from one side of the room to the other. Black mould covered the back wall, which housed a draughty door leading to the yard and outside privy.
It was squalid, basic and cheap, but Sissy preferred to grin and bear it rather than live with Dulcie, her mother-in-law. The woman lived with Percy, her drunken second husband. He wasn’t Jack’s father but had taught his stepson the art of larceny. They had the rare luxury of a two-bedroom house, but as Percy’s alcoholism had left him incapable of grafting, Sissy always wondered how they managed to pay the rent.
When she’d first married Jack, Dulcie had offered them a home, but Sissy had politely declined. She found Dulcie to be a hard woman and feared her quick temper. No, she could never live under the same roof as her. She thought about her own parents who had been dead for several years. She wished her mum was with her now, to hold her hand and tell her everything would be all right.
Sissy paused in the hallway as another wave of pain gripped her body. ‘Jack bloody Garrett,’ she gasped, steadying herself against the wall, ‘where are you when I need you?’
She took several deep breaths and waited for the contraction to pass, eventually managing to get to their one room which, like the scullery, was almost bare, except for two wooden chairs, a rickety table and a large bed on which she desperately wanted to rest. It crossed her mind to bang on the wall and attract the attention of her neighbour, but Miss Capstone was a godly woman and it was no secret that she despised Jack and his unlawful ways. Though Sissy was afraid, she didn’t want to face another scornful lecture and instead lowered her aching body onto her lumpy mattress.
It was hot. The late morning sun shone brightly through the window, illuminating the dilapidated room. Her nostrils twitched at the musty smell, and she wished she’d opened the window. A cool breeze would be welcome, but Sissy felt too weak and knew she should conserve her energy. She lay back and stared at the flaking paint on the ceiling. She wanted this baby so much, but worried about the sort of life she was bringing it into. Money was sparse, and their home was almost derelict, infested with bugs and vermin. All she could offer the child was her unconditional love.
A lone tear slipped from her eye and trickled down her face to rest in her ebony hair, which was now damp with sweat.
The sound of the front door opening snapped Sissy from her worrying thoughts. She heard her husband’s heavy footsteps and sighed with relief as their door flew open. Jack charged into the room like a strong gale bursting open a barn door.
‘Sis, you ain’t gonna believe this… we’re at war!’
Sissy pushed herself up on her haunches and looked at her husband as he waved a newspaper in front of her face. She couldn’t read, but Jack emphatically pointed at the headline.
‘See, it says here: “War declared on Germany”.’
‘Yeah, well, never mind about that… the baby’s coming.’

Sam Michaels lives in Spain with her family and plethora of animals. Having been writing for years Tricksteris her debut novel.
Follow Sam:
Facebook: @SamMichaelsAuthor
Twitter: @SamMichaelsGG