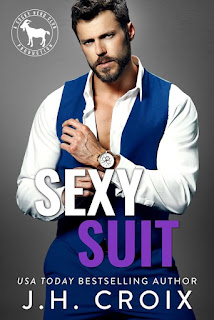 When I met Ryan, I might’ve been trying to break into his basement.

It was for a good cause. I swear. Also, my dog broke in first.

Ryan Blake is jaw-dropping handsome, wealthy & cocky. Not quite my type. By some miracle, he doesn’t call the police on me when he catches me trying to rescue my dog. He even fetches a doctor for me. Don’t ask why.

I don’t figure I’ll see him again. Then, I do. Then, he kisses me. Once. Twice. Is three times the charm? To be honest, I swooned at the first kiss.

All swooning aside, we are seriously opposites. I wear cowboy boots and skirts. He wears suits and ties. He’s all New York City. I’m a Southern girl looking for a new start. We even talk at different speeds.

I absolutely don’t expect to fall for him. So hard I’m skidding sideways just to catch my balance.

This is my first introduction to this author and I’ll definitely be reading more from her as this was a great read.

Ryan and Addie are two complete opposites. Neither of them expected to have feelings for someone they have nothing in common with. However fate works in strange ways. I was so rooting for these two and hoped that they could move on from their past.

A great page turner that had me all warm inside

CONNECT WITH J.H. CROIX: https://jhcroixauthor.com
Posted by Cheekypee reads and reviews at 06:22