What a Girl Wants - blog tour 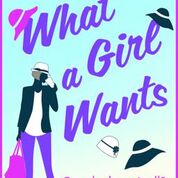 What a girl wants

Angie Coleman was born in 1987 in Lanciano, Italy. She graduated from Organization and Social Relations at the University of Chieti. Winner of the 2016 Ilmioesordio prize.

A heartwarming romance perfect for fans of Lindsey Kelk and Sophie Kinsella.

Gillian Bennett has always dreamed of opening a luxury hat shop, and when she finds the opportunity of a lifetime in the shape of a rent-free shop she thinks her dreams have come true. Her parents are less than thrilled and she has two years to prove to them that this isn’t just a pipe dream, or she’ll be shipped back home and into an office job. But she wasn’t counting on a distraction in the form of sexy but enigmatic Jared, a completely unreadable man that she soon finds herself falling for. Yet, Jared has a secret, and when she finds it out, it shakes Gil to her core. With everything spiralling out of control around her, will Gil ever realise her dreams?

Posted by Cheekypee reads and reviews at 23:08