Staff Sergeant Pierce is everything Ella Gibson doesn’t want in a man, dominant, dangerous, and a member of the Special Forces. But his determination demolishes her resistance.

Ella Gibson is dating with a purpose. She’s got a good job, a car, a townhome. The only thing missing is the perfect man. After having her heart broken, she’s decided that Mr. Perfect will be steady and solid and come home at the end of the day. Bonus points if he’s a sexy Dom. A little kink is the only thing she really misses from her last relationship.

But when her best friend’s older brother, the sexy Staff Sergeant Pierce Holden, interrupts her flirtation with a successful attorney, she’s furious.

Pierce is intent on saving her from a making a mistake. Yet she knows that giving into the temptation of being with him would be an even bigger one.

She’s had a crush on the hero for years. But he’s everything she doesn’t want in a man. Not only is he in the military, he’s a member off an elite Special Forces team. He goes on harrowing missions, and danger is his constant companion.

The more she tries to resist him, the deeper she falls in love. One thing she is sure of, she’s helpless to resist the dominant man’s determination to have her.

Books in the series:

Sierra was born in Manchester, England where she spent her early years traipsing through castles. After living in Denver for a number of years, the internationally acclaimed author now resides in Galveston, Texas. She loves the way history blends with Southern manners (being called "sugar" is an experience unto itself).

She invites you to join her on a sensual journey where the limits are explored and expanded. 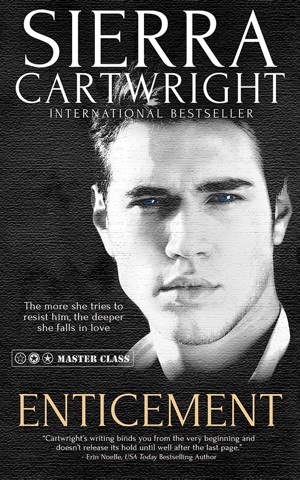 Posted by Cheekypee reads and reviews at 11:46