🌟  🌟  🌟 Promo Tour 🌟  🌟  🌟
#fairytale #gay #erotic #ebook #Kindle #Amazon #kobo #itunes #barnesnnoble #novella #shortstory #1click #quickread #MoBPromos
Title: JACK'S MAGICAL BEANSTALK series ➜➜ http://mybook.to/Jacks
Author: Pablo Michaels https://www.facebook.com/PabloMichaelsAuthor123/
Genre: Adult fairy tale, gay erotica
Hosted: (http://magicofbookspromo.blogspot.com) @MoBPromos
#Synopsis Jack and the Magical Beanstalk:
In this adult fairy tale young, awkward, young Jack sells their prize cow Pearly White for magical beans to a strange man in a red bikini. Little does Jack’s mother, Lorene, know that the beans grow into a giant, magical beanstalk, high above the clouds?
Jack ascends the beanstalk to a land where a Giant Slave serves his larger Master, Jack begs Slave for food to satisfy his hunger from his long journey. But Jack finds Master hoarding treasures.
Attempting to escape the wrath of Master and Slave with the treasures, Jack encounters a handsome, engaging normal sized human man. Sam lives with others that live naturally without clothing deep in the forest. As Jack ages he becomes a handsome man, just like his father, attracting many men, including the two farmhands, Zeke and Adam.
Even though Jack has enabled the farm to prosper with the treasures he stole from Master and is met with increasing danger, he climbs the magical beanstalk again and again to find more treasures and pursue Sam.
#BookLinks
Amazon: http://amzn.to/1PGSFLM
Kobo: https://store.kobobooks.com/en-us/ebook/jack-and-the-magic-beanstalk
iTunes: https://itunes.apple.com/us/book/jack-magical-beanstalk/id1069899104
B&N: http://www.barnesandnoble.com/w/jack-and-the-magical-beanstalk-pablo-michaels/1123255365
Goodreads: https://goo.gl/pDxyVw
#Synopsis Jack and the Jeweled Grotto:
In this sequel to the adult fairy tale book, Jack and the Magical Beanstalk, Jack and Sam have been living happily together on Jack’s prosperous farm with Jack’s widowed mother, Lorene, and the two farmhands, Zeke and Adam.
When Sam started having nightmare concerning his father’s health, Sam became distraught and felt helpless not being able to go back to the land he was born, even though Jack attempted to find a way to climb back up high in the sky to Sam’s native land.
When Sam traded five prized bean seeds and a golden egg to the peculiar old man wearing only a red bikini underwear for five magic beans, he agreed to make it a secret and was unable to tell Jack. Adam was aware Sam was dealing with the peculiar old man and blackmailed Sam into having sex to keep his secret before Sam grew another magical beanstalk.
Before Sam could climb Sam climbed the beanstalk to help his ailing father, unaware there were two new villainous giants, Duchess Luscious Lips Loretta and Queen Buxom Bosom Belinda inhabiting the castle. Jack was left behind to save the farm after a late spring blizzard killed the crop of beans without any more prized seeds to plant.
Did Sam Save his ailing father and brothers? Did Jack figure out a way to save the farm from ruin? Did Jack follow Sam and save him from the wrath of the giants?
#BookLinks
Amazon: http://amzn.to/2fGpYcG
Kobo: https://www.kobo.com/ca/en/ebook/jack-s-magical-beanstalk-the-jeweled-grotto-1
B&N: http://www.barnesandnoble.com/w/jacks-magical-beanstalk-the-jeweled-grotto-pablo-michaels/1124582607?ean=9780994585066
iTunes: https://itunes.apple.com/us/book/jacks-magical-beanstalk-jeweled/id1151038995?mt=11
Goodreads: https://www.goodreads.com/book/show/31846106-jack-s-magical-beanstalk-the-jeweled-grotto
#Synopsis Jack and the Magical Beanstalk:
Jack’s Magical Beanstalk & Sam’s Quandary is the story of Jack and the Magical Beanstalk seen through Jack’s partner and lover’s eyes.
The story began when Jack’s future love interest, Sam watched him flee from the evil giant Master with his bag of gold coins. When they met they were infatuated with each other. Through Jack’s escapades with Master, Sam eventually followed Jack down the magical beanstalk to live with Jack but the beanstalk had to be cut down.
Subsequently, Sam was prevented from seeing his father and brothers. When Sam discovered his father’s illness, he conspired to plant a new magical beanstalk, having to do so secretly. Adam the farmhand had his suspicions and blackmailed Sam into a sexual fling to keep the secret.
Did Sam save his father from sickness? Did Jack follow his lover when the farm faces ruin?
#BookLinks
Amazon: http://amzn.to/2gHZjfd
Kobo: https://www.kobo.com/ca/en/ebook/prelude-to-jack-s-magical-beanstalk-sam-s-quandary
B&N: http://www.barnesandnoble.com/w/prelude-to-jacks-magical-beanstalk-sams-quandary-pablo-michaels/1124582606?ean=9780994585073
iTunes: https://itunes.apple.com/us/book/prelude-to-jacks-magical-beanstalk/id1151054543?mt=11
Goodreads: https://www.goodreads.com/book/show/32501121-prelude-to-jack-s-magical-beanstalk-sam-s-quandary 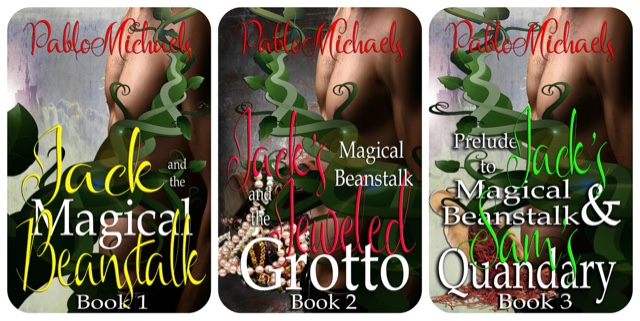 Posted by Cheekypee reads and reviews at 11:17