I lied my way into a band, humiliated them on stage, and got my heart broken by the bassist. Now…we’re on tour together.

Of course my dad, who I haven’t seen since he kicked me out, makes a surprise visit the day before we leave. Spoiler alert: It doesn’t go well. I have to quit the band and go to college or he’s cutting me out of his life for good.

This tour is the best opportunity we may ever have – and it’s already a disaster. We’re broke. We can't stop fighting. And being in such close quarters to Sean isn't exactly helping me get over him. Even though we're just friends now, every time our fingers brush or our eyes catch, my heart betrays me. He's the kind of distraction I can't afford to have right now…no matter how much I wish things were different.

This is one road trip that will be hard to forget…

Sean was waiting outside when I opened the door, a red towel slung over one bare shoulder. His chestnut hair stood up at all angles, and his blue flannel pajama pants were rumpled from sleep.

He looked at me with those bright green eyes, the kind you swore were fake, and smiled. “You finally done in there?”

I rested my palm against the doorframe, playing cool. Telling my eyes not to wander to the taut muscles in his stomach or the tattoo of quarter notes and barbed wire on his left arm. The one I’d traced with my finger a couple times, wondering why he’d picked it. He never did tell me.

Sean was the guy I wanted. The guy I almost had. The guy I couldn’t have. In short? Sean Ramirez drove me fucking crazy.

I smirked. “Actually, I think I need a few more minutes.”

“Okay.” He brushed past me, hanging his towel on the rack. “Just keep the door shut.”

Heat inched up my neck, into my face. I’d never seen Sean completely naked, but there was one night when most of our clothes came off and things went beyond just making out. Not sex. For better or for worse, I was still a virgin. But some days I questioned why. What exactly was I waiting for?

“Whatever.” I rolled my eyes, pretending my heart wasn’t pounding out of my chest. “Leaving now.” He hadn’t flirted with me like this since we were hooking up. Did it mean anything? With Sean, I never knew—“guarded” didn’t even begin to describe him.

He touched my arm. “Hey, wait.” His fingers lingered on my skin for a couple seconds before he dropped his hand. “I heard about your dad showing up yesterday. How’d it go?”

He kept his eyes on mine, no hint of an answer in his expression. “I meant between you and him. Did it go okay?”

Concern flickered across his forehead. “I get it. But if you decide you want to talk…”

“I know. I will. Promise.” I gave him my best reassuring mile and backed out of the bathroom. Away from him. The need to feel his arms around me. Rest my head against his chest. Close my eyes. Breathe.

“See you downstairs,” he said, shutting the door.

We hadn’t hugged since we’d decided to take the benefits out of our friendship. The very short-lived benefits—a week and a half, to be exact. It felt like so much longer at the time.

“You’re not going to watch the show?” I asked, as Zia’s operatic voice echoed outside.

“You shouldn’t have to wait out here alone all night,” Sean said.  I folded my arms. “I’ll be fine.”

“There’s this Thai place two blocks down,” he said. “You’ll hate me for taking you, though, ’cause there’s

nothing comparable in Santa Cruz.”

“I already hate you.” It came out in a joking way, but a small part of me meant it.

He gave me a nudge. “Come on; I’m paying. They’ve got great red curry.”

We’d all gone out for Thai a month ago, a treat for the whole band. Apparently he remembered my order. I could read into it, but Sean was basically a genius. He probably had a great memory. My stomach rumbled at the thought of creamy coconut milk and spicy curry paste mixed with tender (but still crispy) veggies. It was the ultimate comfort food.

“Fine,” I said. “But only if your offer comes with mango sticky rice.”

“And miss out on coconut ice cream? Hell, no.” I shrugged. “And we can’t get both because you’re cheap?”

He grinned, shaking his head. “Sure. Take me for all I’m worth.”

Zia’s ethereal vocals echoed outside and seeped into my skin. “There’s you and there’s me,” she sang. “There’s nothing in between.”

“Let’s go, princess.” He motioned toward the crosswalk behind us. “I can’t afford a limo.”

I made a face at him. He’d called me “princess” since day one, a dig at me growing up wealthy, and he knew how much I hated that particular nickname.

“Just so you know”—I joined him in the crosswalk—“I’ve never been in a limo.” A horn sounded behind us, making me jump.

Sean touched my back for a second before dropping his arm. Two cars were waiting to turn right, but the guy in the rear car, a black Mercedes, thought the SUV in front of him should’ve gone already, oncoming traffic or not. He resembled a rabid orchestra conductor.

“You sure about that?” Sean asked. “Not even for a prom?”

A laugh escaped my lips, but it sounded more like a snort. “Are you kidding? Me at a prom?”

“Right. You were too much of a special snowflake for the prom. I bet you and Jason stayed home and mocked it all night.”

That actually wasn’t too far from the truth, which both weirded me out and pissed me off. It wasn’t that we thought we were too different or above it all. It just didn’t sound like fun. We definitely didn’t have hundreds or—in the case of most of our peers—thousands of dollars to spend on one outfit. Our parents weren’t the types to hand us money any time we wanted it. And the thought of slow dancing with each other? Yeah, we wouldn’t have lasted thirty seconds without cracking up.

“Nope,” I said. “We saw Placebo and pitied all the losers who were missing out.”

I gave him a shove. “As if you’d be caught dead at a prom. Mr. Ooooh”—I wiggled my fingers—“I only go to dive clubs where I can stand in a corner and pretend I’m surly.”

“So you’re saying I’m a ray of sunshine?”

“I’m saying you’re somewhere in between.”

Sean smoothed the blanket flat on the grass, and we lay side by side, our bodies only a couple inches apart. Close enough for me to feel the warmth of his skin and smell the shampoo in his hair—something lemony.

“Depends on the day. How much you take. Your state of mind.”

“What do you see and feel right now?”

“There’s a buzz under my skin. And colors seem sharper, like if you turned up the contrast in a picture. If I stare at one spot too long, it starts to vibrate.” The back of his hand brushed against mine. “Touch feels”—he moved his hand away—“more intense.”

My heart beat a little faster. “Then why’d you pull away?”

He let out a breath, staying quiet for a minute. Then his hand slid between my palm and my thigh, his fingers tangling with mine.

I closed my eyes, a jolt running through me. Every part of me tingled, even my toes. There was a voice inside my head warning me not to let him in.

But I didn’t want to listen.

“Your fingers are freezing,” he said, giving them a little squeeze.

“They always are.” I opened my eyes, and my breath caught in my throat. “So is it true what Veta said? You’ve got a thing for psychedelics?”

“How many times have you done them?”

“A couple. I haven’t done anything in a long time.”

His thumb massaged the soft spot between my thumb and index finger. “You’re asking a lot of questions,” he said softly.

Because I was burning up inside. Fighting the urge to roll over and press my lips against his neck. To feel those callused fingers on my face, my back, in places that made me shudder.

“I’ve been disconnected lately,” he said. “Like I’m here but not. I haven’t been able to draw…”

I faced him. “And you just want to feel something?”

He nodded, his gaze focused on one spot in the sky.

He didn’t elaborate, and I didn’t want to push it. I was afraid of the answer.

I wasn’t sure I’d be able to resist falling in love with the moment. The way he made me feel. I knew I’d wake up tomorrow wanting more.

ALSO AVAILABLE IN THE AMPLIFIED SERIES

Tara Kelly adores variety in her life. In addition to being an author, she’s a one-girl-band, graphic designer, videographer, photographer, and avocado addict. You can usually find her hiking in The Rockies or chasing thunderstorms. She lives in Colorado with her sound design master husband and two gigantic, fluffy cats. 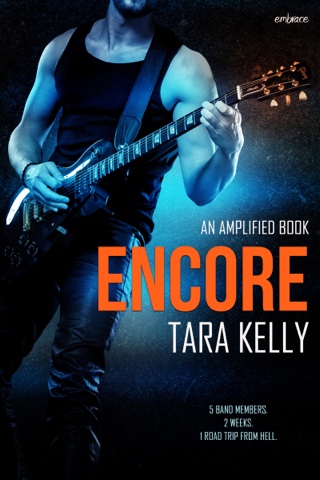 Posted by Cheekypee reads and reviews at 11:54