🌟  🌟  🌟 Release Blast 🌟  🌟  🌟
#newrelease #Amazon #romance #series #spinoff #The Remingtons #LoveInBloom #KindleWorld #bestselling #ebook #TBR #hotread
THE REMINGTONS join the LOVE IN BLOOM series by New York Times & USA Today bestselling and award-winning author Melissa Foster. This 6-book steamy contemporary romance series features alpha male heroes and sexy, empowered women. They're flawed, funny, passionate, and very relatable to readers who enjoy new adult romance, contemporary romance, and women's fiction.
5 incredible authors have written spinoff books based on characters from different books in the LOVE IN BLOOM series. These books are all featured through the Kindle World.
Welcome to part 2!
Hosted: (http://magicofbookspromo.blogspot.com) @MoBPromos
PROOF OF LOVE BY C.M. ALBERT
➜➜ http://amzn.to/2h9KONG
Dez Wright bed hops because it’s easier to let a man between her legs than into her heart. After the death of her college sweetheart in a motorcycle accident that leaves Dez with a bum knee and a shattered heart, she throws all of her passion and energy into the one thing that can't hurt her: her flourishing photography career.
Mitch Michaelson thought he was dead the day he wrestled a pissed-off shark snorkeling off the Hawaiian coast with a model whose name he can hardly remember. But the tryst in paradise cost him more than his arm; it destroyed his career as a famous iron sculptor. After years of intense therapy, Mitch is finally rebuilding a new life working with kids at the community center in his sleepy North Carolina town.
When Dez blows into Arden’s Glen looking to take his picture for some do-gooder coffee table book, Mitch wants no part of it. He's put his glamorous past where it belongs and wants nothing more than to lay low, help the kids in his community, and be left alone. When fate steps in and brings the two together to help their friends and a troubled kid in need, will a couple of photographs and a magical one-night stand be all the proof of love they need? Or will their two stubborn hearts stay hell-bent on keeping their walls in place and playing it safe forever?
MENDED BY LOVE BY STACY EATON
➜➜ http://amzn.to/2h9C0aN
Josey Napier had given up on love after a longtime crush told her he loved her like a sister. Intent on staying busy at work as a surgical nurse to suppress the pain, Josey is shocked when she recognizes Tucker Wheatcraft, the police officer who saved a friend’s child from drowning, on her operating room table—fighting for his own life.
Four months after pulling a young boy from the freezing water while off duty, Tucker is struck by a car and shot. When he wakes up and finds the woman he’s had his eye on standing vigil over him, he’s thankful to be alive, but after weeks of therapy, Tucker still isn’t getting the feeling back in his legs, and the mind games are starting to wreak havoc with him. Can he ever be the kind of man that Josey deserves? 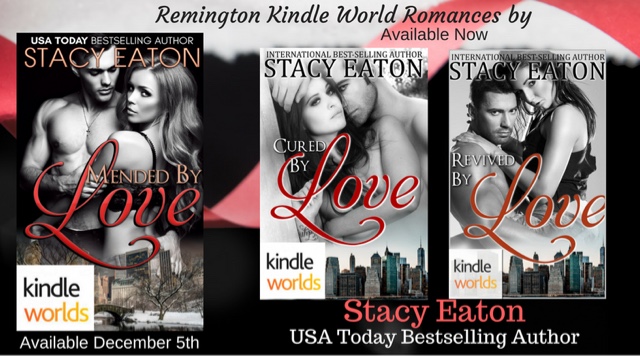 Posted by Cheekypee reads and reviews at 11:24