NEW RELEASE
Author Name: Caraway Carter
Book Name: The First Time
(Sequel to ‘Storming Love: Earthquake - Anders & Ujaruk
Release Date: December 25, 2015
Blurb:
After surviving through a massive earthquake, Anders and Ujaruk know they can handle a crisis, but what about everyday life? Ujaruk moved in to help Anders while his leg healed, now that the cast is off, what happens next? Families, holidays and the first time.
Pages or Words: 105 pages, 29,000 words
Categories: Contemporary, M/M Romance
Excerpt:
The ground had opened up, and he was screaming.
He was outside the cave, and the trees were falling down everywhere. His broken leg was throbbing and Ujaruk was nowhere to be seen. And then, with a heaving like a bear rolling over a boulder, the thin crack in the ground widened into a huge fissure less than five feet from where he lay on the slanted hillside. Anders screamed again as he began to slide helplessly down the slope toward the yawning, gaping mouth of the hungry earth.
As he grabbed at the turf sliding away beneath him, he saw Ujaruk running toward him from the other side of the widening part in the earth. “Anders? Anders!”
But Anders was sliding down the slope into the chasm, helpless, screaming all the way as Ujaruk shouted his name...
He jerked awake.
His hands were grasping bedsheets, not turf. He was here in his bed, in his house, nowhere near that cave. Safe. He was safe.
It had just been a dream. He hadn’t been swallowed up by the earth. He hadn’t been in danger at all — Ujaruk had got him out of the cave and to the hospital.
Why did I want to be a geologist, again? He wondered muzzily.
Then he realized that part of the dream had been real. Ujaruk was calling his name. “Anders? You awake yet, hon?” There was a knock at the door, which creaked open as Ujaruk shouldered it aside. “Good morning!”
“You’re still here,” Anders said, turning over in the rumpled bed and trying on a smile. “Good morning.”
“Where else would I be?” Ujaruk grinned, holding out a cup of coffee with one hand and a breakfast tray with the other. Four strips of bacon and a scramble of eggs sat on a plate in the middle of it, overshadowed slightly by a bobbing yellow daisy that threatened to fall out of the too-short bud vase it was standing in.
“I had a dream,” Anders said. “I dreamed that — that you’d taken a job in Arizona.” He turned his face away so that the lie didn’t show. His heart was still racing.
“Crazy dream,” Ujaruk commented. “Can you see me in Arizona? I’d roast in nothing at.”
Anders smiled. “I’m glad it was only a dream, then.”
I wonder how much longer I can stay in this cast, he thought as Ujaruk put the tray over him in the bed, smiling weakly at his— boyfriend? Roommate? Coworker...
He turned his mind to the food in front of him as Ujaruk sat down in the single chair next to the bed.
It’s been two months. How many more do we have?
Buy the book:
AllRomance: https://www.allromanceebooks.com/product-thefirsttime-1936907-149.html
MLR: http://www.mlrbooks.com/ShowAuthorBooks.php?list=_ABKLIST225&author=Caraway!Carter
Meet the author:
Caraway Carter has worn numerous hats. He's been a furniture salesman, a dresser, a costumer, an actor/waiter, a rabble rouser, a poet and most recently a writer. He married his husband on Halloween and they are the loving parents of two rambunctious cats. He loves words and stringing them together, he loves sex and sexy men, he loves seeing how far his muse will take him and he's looking forward to entertaining you.
Where to find the author:
Facebook: https://www.facebook.com/CarawayCarter
Twitter: https://twitter.com/CarawayCarter
Pinterest: https://www.pinterest.com/carawaycarter/
Website: https://carawaycarter.com
Goodreads Link: https://www.goodreads.com/author/show/13539002.Caraway_Carter
Publisher: MLR Press
Cover Artist: Winterheart Designs
Tour Dates & Stops:
Parker Williams, BFD Book Blog, Divine Magazine, Scattered Thoughts & Rogue Words, The Hat Party, TTC Books and More, Louise Lyons, Happily Ever Chapter, Book Reviews and More by Kathy, A.M. Leibowitz, Tara Lain, Bayou Book Junkie, Mikky's World of Books, Dawn’s Reading Nook, MM Good Book Reviews, Inked Rainbow Reads, Wicked Faerie's Tales and Reviews, Molly Lolly, Velvet Panic, Cheekypee Reads and Reviews 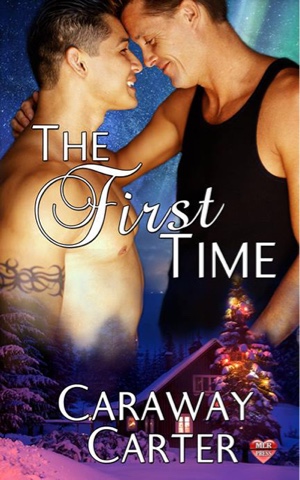 Posted by Cheekypee reads and reviews at 16:01