Five actors, one play, a murder, and a security guard who seeks the truth, not to mention love, all set the stage for this hilarious tale of mystery and intrigue in small town America. You’ll never guess what, or who, is going to come next!

I turned to glance at the audience, saw that everyone was suddenly and surprisingly alert and then quickly whipped my head back around to see all the actors in the play each pointing a gun at someone else in the play. It was an interesting plot twist given that the first act was more comedy—intentional or not—rather than murder mystery.

Then, BOOM, a gun went off on stage.

I jumped. The theater jumped in unison. Several people sucked in their breaths. I hoped no one was about to choke on a lozenge because mouth-to-mouth on the elderly is never fun—trust me on that one. The actress ran to one of her lovers. She knelt down by his side. Her eyes went wide. She screamed. I almost applauded. It was the best acting she’d done all day. Then she screamed again. “He’s been shot!”

“Someone call the police!” she added.

No one moved, though I heard a few people behind me shift nervously around in their seats. One old guy coughed. I waited for a choking sound. Thankfully, it was just a cough and nothing more. Phew.

The other actors suddenly looked uneasy. I reached for my gun on instinct. Well, I reached for my can of mace actually, which was all I was allowed to legally carry, but it was still a weapon—you now, mostly. I mean, a shot of mace to the eyes can take a man down right quick. I know because I accidentally on purpose shot myself in the face with it once, just to see if mace had an expiration date. Turned out, it doesn’t.

The other actors rushed to their downed brethren. Suddenly, they didn’t all seem so, you know, acty. I too rushed the stage, taking the stairs off to the side two at a time. “Nobody move!” I shouted, can of mace held up high.

They all stared up at me and grimaced. The cuckolded husband shouted, “Call the police! He really has been shot!”

Rob Rosen (www.therobrosen.com), award-winning author of the novels Sparkle: The Queerest Book You'll Ever Love, Divas Las Vegas, Hot Lava, Southern Fried, Queerwolf, Vamp, Queens of the Apocalypse, Creature Comfort and Fate, and editor of the anthologies Lust in Time, Men of the Manor and Best Gay Erotica 2015 and2016, has had short stories featured in more than 200 anthologies. 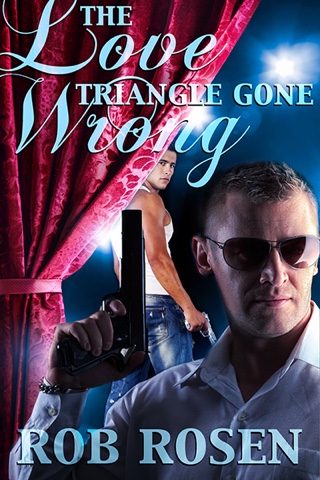 Posted by Cheekypee reads and reviews at 09:35