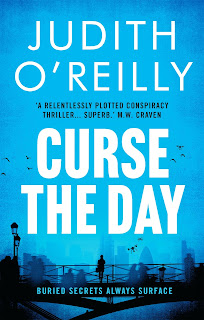 Judith O'Reilly is the author of Wife in the North, a top-three Sunday Times bestseller and BBC Radio 4 Book of the Week, and The Year of Doing Good. Judith is a former senior journalist with The Sunday Times and a former political producer with BBC 2's Newsnight and ITN's Channel 4 News. Her first Michael North thriller, Killing State was set in Westminster and was praised by thriller writers around the globe.

At a global tech gala hosted at the British Museum, scientist Tobias Hawke is due to unveil an astonishing breakthrough. His AI system appears to have reached consciousness, making Hawke the leading light in his field.
But when terrorists storm the building, they don't just leave chaos in their wake. They seize Hawke's masterwork, sparking a chain reaction of explosive events which could end the world as we know it.
Michael North, ex-assassin and spy-for-hire, must find the killers and recover the AI. But he can't do it alone. Hawke's wife, Esme, and teenage hacker, Fangfang, have their own reasons to help complete North's mission – and together they unravel a dark and deadly conspiracy which stretches right to the top of the British elite.
Can North survive long enough to uncover the whole truth? Or is it already too late for humanity?

For your chance to be entered in to a draw to win a brand-new Kindle Fire, simply review either the eBook or the hardback of Curse The Day by Judith O’Reilly. Send your proof of review to competitions@headofzeus.com.

She’d left the bathroom door ajar and it creaked as it swung inwards, the shadows from the candlelight flickering against the tiled wall.
‘You made it.’ She turned her head towards the door.
But the man in the doorway staring at her naked body wasn’t Tobias. It was a stranger in a black boiler suit and a balaclava. Esme screamed.
She thought afterwards she should have fought her way past him and tried to make a break for the front door. But some primitive instinct kicked in and she leaped from the bath, water everywhere, and started throwing whatever she could put her hand on – shampoos, a heavy glass jar of bath salts, bottles and potions by the handbasin. With some relief, her fingers found a small pair of manicure scissors and she gripped them in her fist.
The stranger grunted with pain as she stabbed them into the webbing between his thumb and index finger and again into the side of his neck, where they trembled, suspended, before he knocked them away. With a roar, he hauled her out into the hall, knocking over a heavy glass vase, water and roses everywhere, dragging her by her hair into the study. He shook her like a rag doll and she felt herself slam against the wall as he backhanded a slap across her face. He was cross, she had time to think before he punched her in the gut, about the scissors.
At the explosion of pain, she sank to her knees, collapsing sideways and rolling on to the floor as vomit rose in her throat. For a second, she lost all sense of space and time, before the smell of bile brought her round, and she thought to use her elbows and heels to scrabble backwards, upright and away from her attacker.
Terror must have given her strength, because she tipped the office chair between them and then the desk, the computer unbalancing the balaclava’d man and bringing him to the floor. Reaching for her, he bellowed with rage and she swerved to avoid him. The study suddenly enormous, the door a mile away, getting no nearer. She could see the flowers strewn across the hall floor, their petals crushed and soaking.
‘Syd, call the police.’ She was screaming. She couldn’t hear herself but her vocal cords felt like they were tearing.
‘I’m sorry, Esme. I didn’t catch that.’ The tone of Syd’s voice was one of regret.
Tobias maintained the system understood more if the voice command was neutral and emotion free.
‘Syd…’ She couldn’t get out the words as she made it to the door, slamming it shut behind her, attempting to hold it closed against him.
‘Syd. Call the police.’ She screamed it again as the door opened and she felt the man lunge and his hand take hold of her ankle. Felt herself tip, and the impact as she fell forward and hit the parquet floor. She seized hold of the glass vase as he dragged her back into the study, turning and smashing it against the top of his head, but he didn’t let go.
Blood filled Esme’s mouth, her teeth closing on her tongue, as the attacker’s right hand grabbed her by the wrist. The balaclava dropped to the floor, by her face.

Posted by Cheekypee reads and reviews at 11:22