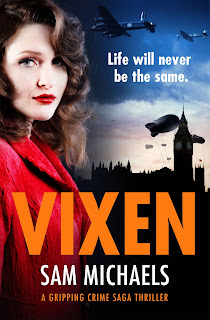 While World War Two rages on around them, the gangs of London are fighting for their turf...

There might be a war on, but that doesn't stop Georgina Garrett running her business with an iron fist. No one said running the Battersea gang was going to be easy, but her unflinchable nature makes Georgina unstoppable.
With a role that requires a ruthless ability to seek revenge and pay out crippling punishments, Georgina's enemies are growing in number. With a target on her back, Georgina knows she must do everything to protect her family. But, with the loss of someone closest to her, can Georgina rise up from the ashes or allow a usurper take her crown?
Perfect for fans of Peaky Blinders, Martina Cole and Lesley Pearse.

Half an hour later, the car pulled up outside Georgina’s home. It was the same house she’d lived in all her life, raised by her dear departed grandmother. She could have moved on and rented somewhere bigger and in a nicer area but this was where her heart and memories lived and she couldn’t bring herself to leave them behind. It was the only home she’d ever known, a constant in her life.
Victor opened the back door of the car and as Georgina climbed out, she saw Lash coming from the house towards her.
‘Have you heard the news?’ he asked gravely.
‘Yes, we’re at war. Where’s Alfie?’
‘Your dad has taken him over the park,’ Lash answered and gently kissed her cheek. As he did, the air suddenly filled with a screeching, wailing noise.
‘Air raid sirens,’ Lash said and looked towards the sky.
A woman from a few doors down dashed past them. She was crying and shouting, ‘The Jerries are gonna bomb us… Take cover!’
She noticed the woman was only wearing one shoe and was obviously panicking. Lash reached for Georgina’s hand and gently squeezed it as if to offer reassurance.
Georgina returned the gesture with a tender smile. ‘They’re probably just testing them out. I’m not worried – there’s nothing here for the Germans to drop bombs on. I bet Alfie is loving it – you know how he enjoys playing soldiers. Come on, let’s get inside and put the kettle on. I’m gasping for a cuppa.’
As she followed Lash into the hallway, over the shrill sound of the sirens, she heard the telephone trill. She guessed it would be Molly. Her friend would be calling to voice her fears about the war. But when she picked up the receiver and before she had a chance to say hello, Molly began blurting out something about Charlotte.
‘Hey, slow down. The line is crackling, I can’t hear you properly,’ Georgina said into the mouthpiece and rolled her eyes at Lash.
Molly took a deep breath and explained that Charlotte had run off again from their farm in Kent. She suspected her sixteen-year-old sister was in Battersea somewhere.
‘Don’t worry, Molly, I’ll find her,’ Georgina said and then she heard Fanny’s voice in the background, scathing, as usual. Molly’s mother still blamed Georgina for the death of her other daughter, Ethel, and made no secret about it.
Molly told her mother to be quiet and Georgina promised she’d do everything she could to locate Charlotte.
‘What was all that about?’ Lash asked as Georgina hung up the telephone.
By now, the sirens had stopped but Georgina’s head was still buzzing. ‘Bloody Charlotte has run away again,’ she answered as she walked through to the kitchen.
‘Well, she’s sixteen. She can choose to live where she likes and she seems to prefer Battersea to the farm.’
‘Yeah, but you know what Fanny’s like. I’ve offered to give Charlotte a job and keep an eye on her but Fanny won’t hear of it. Do me a favour, darling, and get on the phone to put word out. She’ll turn up again soon, like a bad penny.’
Georgina filled the kettle at the sink and gazed out into the backyard. Her eyes set on the piece of dirt next to the coal bunker. Still, no grass grew over that area where her beloved grandmother had buried a barrel with her second husband, Percy, inside. Well, thought Georgina, her grandmother had lived through the Great War. In fact, Georgina had been born on the day war had been declared and she’d survived unscathed. She had no reason to worry about this one. And like she’d told Lash, there wasn’t anything round here worth bombing. Huh, she thought defiantly, if the Germans thought they’d like to visit her town, they should be the ones to be scared. After all, she’d built herself a reputation and now just about everyone in Battersea either respected or feared the name Georgina Garrett and that’s how she intended to keep it.

Sam Michaels lives in Spain with her family and plethora of animals. Having been writing for years Trickster is her debut novel.
Follow Sam:
Facebook: @SamMichaelsAuthor
Twitter: @SamMichaelsGG