★★★ COVER REVEAL ★★★
Book 7 in the USA Today bestselling Storm MC series by Nina Levine is coming on October 19th! Pre order your copy today at $2.99 before the price increases to $3.99 on release ♡
Command (Storm MC #7) by Nina Levine
Genre: MC Romance
Cover Designer: Romantic Book Affairs
Photographer: Eric Battershell Photography
Models: Jelena Abbou & Billy Cluver
Release Date: October 19th, 2015
Betrayal. Destruction. Loss.
The Storm MC is a club in crisis and their new President, Scott Cole, has declared war on their enemy. As Scott takes command, the MC is thrust into the biggest battle in their history – a battle to not only save the club, but the lives of its members.
Harlow James stands behind her man as he takes charge. She’s determined to prove she can be the woman he needs. However, somewhere along the way, she’s lost a piece of herself, and she fights to be strong for him when she feels anything but strong.
As the club descends into chaos, Scott and Harlow are pulled in opposite directions while they try to protect everything that is important to them. Their relationship is tested in ways it never has been, but they cling to the faith they have in each other.
Is faith enough to get you through when all appears to be lost? For Scott and Harlow, it may be the only thing that, in the end, will save them and the club.
COMMAND (STORM MC #7) COMING 19TH OCTOBER
Pre-order for the special price of $2.99. Will go up to $3.99 at release.
Amazon US: http://amzn.to/1O9rpcB
Amazon UK: http://amzn.to/1KB1M4M
Amazon AUS: http://bit.ly/1LUaND2
Amazon CA: http://amzn.to/1K2BotU
iBooks: http://apple.co/1NnhhNR
B&N: http://bit.ly/1TVfYtE
Kobo: http://bit.ly/1j3Mj0J 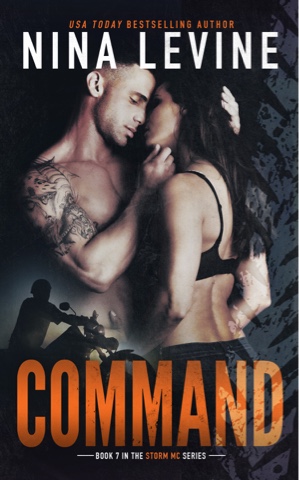 Posted by Cheekypee reads and reviews at 04:54