Bloody…broken…barely surviving…
Danae “Dani” Espinoza is on the run and desperate to escape the demons of her past. Plans to hide out in a sleepy  Los Angeles suburb turn into a pipe dream as she is drawn into the secret filled world of the local motorcycle club. Dani soon learns that her secrets and lies are nothing compared to those kept behind the clubhouse doors. Trying to avoid the suspicious Vice President, she must keep a low profile in order to survive. The trouble is he has other ideas.
Bike…babes…and booze…
Tyler "Hero" Tobias has simple needs. Being the Heaven's Rejects MC Vice President, he has all three at his disposal. But he has his own ghosts that keep him awake at night. When Dani arrives at the clubhouse, he knows he should stay away but there is something about her dark beauty and the mystery that surrounds her that makes him burn. There are secrets in her eyes and lies in her smile and he knows he should put his club first, but Hero’s heart and loyalty are about to be tested.
Can an angel with blood-covered wings and the devil himself resist temptation or will they risk bringing hellfire down on everything that they love?

Avelyn Paige is a born and raised Indiana girl. She may be a Hoosier by birth, but she’s a Boilermaker by choice! Avelynlives in rural Indiana with her pastor husband, 2 spoiled cats, and one very odd looking dog.  She’s an oncology research scientist by day and a writer and book review blogger by night. She enjoys reading anything she can get her hands, baking, and spending time with her friends and family.

Never intending  to ever write her own book, the idea behind the Damaged series came to her on a drive to work early one morning thinking about her father who’d recently passed away. His strength during his cancer and rare blood disease battle inspired Avelyn to do something she’s never thought about before. She’s excited to see where this wild ride takes her. 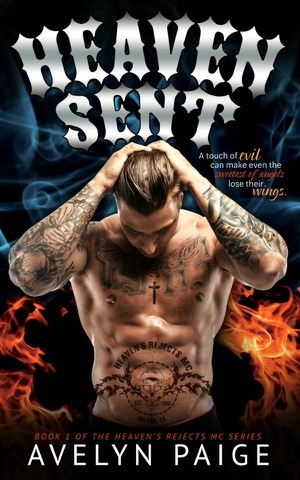 Posted by Cheekypee reads and reviews at 06:41