The Lies Between Us - blog tour

BLOG TOUR
The Lies Between Us (Book Four) in the
Devil’s Dust MC Series by M.N Forgy
is finally here!!
Cherry & Lip’s standalone romance is
NOW AVAILABLE
Amazon: http://amzn.to/1HUdwaL
Amazon UK: http://amzn.to/1JljRBe
B&N: http://bit.ly/1MzHWW9
Apple: http://apple.co/1MB3LpJ
Blurb
Cherry’s life growing up was nothing short of a nightmare. Having an abusive father forced her to fend for herself from an early age. Bruised and emotionally broken, she finally escaped, running straight into the comfort that Lip's arms brought. In the beginning, everything seemed to fall into place perfectly. He made her forget the messed-up ways of her life. But secrets can’t stay neglected. They have a habit of revealing themselves regardless of the consequences. Terrified, Cherry can’t speak a word or she’ll lose it all.
Lip is no stranger to the criminal life. Growing up among convicts, he wanted nothing more than to show his worth. He’ll do anything for the club without question, including serving six years in prison. But nobody could have predicted life’s plan. Rugged, tattooed, and wanting nothing more than to have Cherry, Lip is no longer the man whom Cherry remembers. After his release, he came out a beast with more secrets and lies than his cage could hold.
Excerpt
After he leaves, I open his wallet, reading his name, address, weight. All of it.
“Phillip DeLuca.” I taste his name running off my lips as I trace my finger over his picture. He’s so handsome. He’s the kind of guy most people would be afraid of, but not me. I want to get to know him. Lost in a daydream, my car door is yanked open.
“Where the fuck is it, bitch?”
“What?” I shriek as I’m pulled out of the car and slammed forward onto the hot hood. “I don’t have anything!” I scream, trying to pull free. He shoves me back down on the hood. His hand tangled in my hair.
“Don’t think about moving,” he spits, his tone harsh. I roll my eyes and continue leaning over the hood. My heart slams against my chest in pure panic, and my hands shake. He pulls away and leans in to the car. Within seconds, he finds his wallet. Shit.
He peers at me with a fierce energy in his eyes. The intensity has me pulling off the hood, scared out of my mind.
“You have some balls,” he mutters, shoving his wallet back in his pocket. His tone is soft and tender suddenly. I turn my head and eye him angrily.
“Fuck you.” I cross my arms and lean my hip against the car. My choice of words more confident than I’m feeling.
He steps up to me and grabs my hips hard with both hands. My skin burns, and my mouth parts with desire. His brown eyes find mine, and his hands yank my body closer to his. I feel like all the air is sucked from my lungs as I search his dark eyes. Placing my hands on his solid chest to steady myself, my palms buzz with excitement.
“You’d like that, wouldn’t you?” He looks me up and down and leans in close. “You’d like it if I pushed you over the hood of this car and fucked you ‘til your legs gave out.” His words feather against my lips, he’s so close. I hold my breath, willing my body to pull away, but I don’t move. Just when I think he’s going to kiss me, he grabs my hand and pulls it upward. I furrow my brows and watch as he pulls a pen from his back pocket, pulling the cap off with his teeth. He writes his number and the word ‘Lip’ on my hand.
“Call me. Don’t make me come find you, Cherry.”
“Cherry?” I ask out loud.
“Your swimsuit,” he yells over his shoulder before starting his bike. I look down at my white shirt noticing my cherry bikini peeking out from the bust line. A smile creeps across my face. I know I shouldn’t like him, but I kind of do. Driving past me, he winks and I swear I sigh like a damn fool.
The Devil’s Dust Series
What Doesn’t Destroy Us (Book One) The Devil’s Dust
Amazon US: http://amzn.to/1MghKfL
Amazon UK: http://amzn.to/1NvBjnL
B& N: http://bit.ly/1BUw5xk
iTunes: http://bit.ly/1zqhR0Y
The Scars that Define Us (Book Two) The Devil’s Dust
Amazon US: http://amzn.to/1GdpVrd
Amazon UK: http://amzn.to/1NvBmzU
B& N: http://bit.ly/1BUvL1J
iTunes: http://apple.co/1x5EiJf
The Broken Piece of Us (Book 2.5) The Devil’s Dust
Amazon US: http://amzn.to/1NvAGdU
Amazon UK: http://amzn.to/1DXnUwV
B& N: http://bit.ly/1HfdTPd
iTunes: http://apple.co/18rMayu
The Fear That Divides Us (Book Three) The Devil’s Dust
Amazon: http://amzn.to/1HUdwaL
Amazon UK: http://amzn.to/1JljRBe
B& N: http://bit.ly/1FsVuNz
iTunes: http://apple.co/1EYNXrP
Love That Defies Us (Novella)
Amazon US: http://amzn.to/1HfbMLj
Amazon UK: http://amzn.to/1wfkojP
B& N: http://bit.ly/1DV0vxI
iTunes: http://bit.ly/1zQk8X4
About the Author:
M.N. Forgy was raised in Missouri where she still lives with her family. She's a soccer mom by day and a saucy writer by night. M.N. Forgy started writing at a young age but never took it seriously until years later, as a stay-at-home mom, she opened her laptop and started writing again. As a role model for her children, she felt she couldn't live with the "what if" anymore and finally took a chance on her character's story. So, with her glass of wine in hand and a stray Barbie sharing her seat, she continues to create and please her fans.
Stalk Her:  Website | Facebook | Twitter | Goodreads
GIVEAWAY
Swag pack, including a signed paperback of What Doesn't Destroy Us, & $50 Amazon gift card.
<a class="rcptr" href="http://www.rafflecopter.com/rafl/display/09964f03739/" rel="nofollow" data-raflid="09964f03739" data-theme="classic" data-template="" id="rcwidget_91cw48p3">a Rafflecopter giveaway</a>
<script src="//widget-prime.rafflecopter.com/launch.js"></script>
Share Link: http://www.rafflecopter.com/rafl/share-code/MDk5NjRmMDM5ZDM4YTBjYWM0YzAyYzM0NGI2ODRhOjczOQ==/? 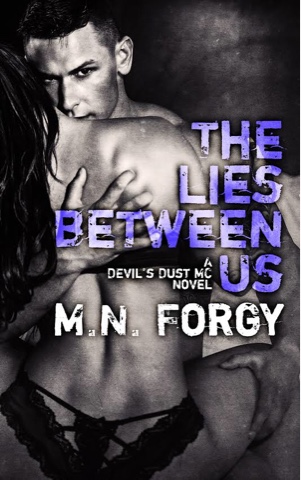 Posted by Cheekypee reads and reviews at 08:44