BLOG TOUR
Book Blurb
Monica Beggs is more than the hottest porn star out on DVD--she's Finn Daniel's next assignment.
Lights. Camera. Lube?
Famous porn star Monica Beggs has wrapped up another grueling on-location movie shoot when the Colombian cartel attempts to kidnap her. Their guns are as real as the price on her pretty head.
Former Special Ops and present day surfer, Finn Daniels recognizes a lady in distress when he sees one—especially when it’s his adult film crush being hustled out the door. He’s no longer in the business of busting up the underworld, but that doesn’t deflect his moral compass.
In a fast-paced adventure--over land, sea, and air--playing it hot and heavy can only lead them straight into action!
Excerpt
He hooked one arm behind her back and another under her knees, then lifted. Placing her on the leather seat, they were nearly the same level as he stared into the depth of her clear eyes. Pressure bloomed below his belt and short-circuited his brain.
“Thank you, again.” Monica tilted her head and smiled. Her breath caressed his cheek in warm puffs and he wondered how her kiss would feel…how she would taste. Wondered what moves she owned and might use on him.
His shoulders crowded the door space as he leaned in the car. She released a tiny sigh. Their mouths were inches apart. His fingers itched to discover the texture of her hair and test the softness of her skin. The heat in her eyes matched the fire in his blood, beckoning to him before lowering to settle on his lips.
Did she want him to kiss her? Finn parted his lips in anticipation.
He’d never found danger to be a turn-on but apparently he’d found a brand-new world with Monica Beggs.
About the Author
Always on the hunt for the uncommon things in life, award-winning author Sheri Fredricks thrives on creating one-of-a-kind adventures.
A former engineering secretary, she lives on California’s beautiful central coast. "I wanted to move away from a profession of inflexible right angles and create an unboxed world with no boundaries." A voracious reader since her early years, Sheri found her brain crowded with stories of her own. "Ultimately," she says, "my husband encouraged me to write them all down."
Winner of the Paranormal Romance Guild Reviewer’s Choice Award and a Finalist multiple times for InD’Tale Magazine’s Reward Of Novel Excellence award (RONE), she has numerous five-star reviews everywhere eBooks are sold.
Sheri loves to spend time at home and connecting with readers. A computer hutch keeps her focused on creating stories, but the panoramic view of life on a ranch will call her outside to play in the sun.
Find Sheri Online!
Amazon http://amzn.to/1KbN2DV
Goodreads https://www.goodreads.com/book/show/26222950-monica-beggs?ac=1
Website http://www.sherifredricks.com/
Facebook http://www.facebook.com/SheriFredricks
Twitter http://twitter.com/Sheri_Fredricks
Goodreads http://www.goodreads.com/goodreadscomsheri_fredricks
Blog http://sherifredricks.blogspot.com/
G+ http://is.gd/VmLa5I
Amazon http://www.amazon.com/Sheri-Fredricks/e/B008L3T50Y/ref=ntt_athr_dp_pel_1
Linkedin http://www.linkedin.com/pub/sheri-fredricks/26/384/829
Pinterest http://www.pinterest.com/sherifredricks
Giveaway https://giveawaytools.com/giveaway.php?sk=43386330689
Tour Wide Giveaway!
There’s an awesome tour wide giveaway. One lucky commenter from the tour will win an e-set of Sheri’s entire backlist! 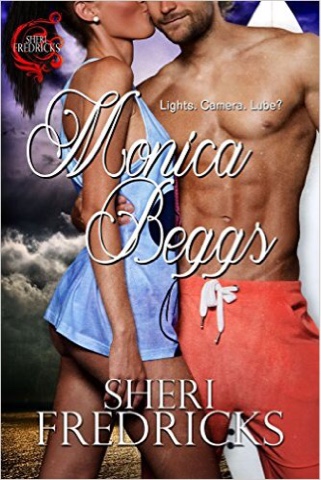 Posted by Cheekypee reads and reviews at 04:18