SPOTLIGHT
Grayson Baxter, first born of Julian and Joan, has always been the prodigal of the Baxter clan. He has also been heavily into drugs since he was a teenager. As his brother Cass enters a new phase in his life and is headed towards taking over the family business, Grayson’s drug use worsens. When he attempts to break away from the family that hates him, something goes terribly wrong. After tragedy strikes and with the help of a unique rehab facility, Grayson gets his life back. He discovers and pursues his desire to become a therapist and fall in love with Bindi Gail. Just as they start a life together, one fateful decision tears them apart. Through life’s twists and turns he finds his way from lost to found and learns to love again, Grayson’s journey to survive and realize his path as a Baxter makes his redemption more satisfying.
EXCERPT
“Close your eyes,” she ordered.
“What?”
“Just do it.”
Grayson complied. He heard a rustling sound, light footsteps, and then she said, “Open your mouth.” He tried to partially open one eye and she barked, “No peeking.”
When he did, she gently placed something round. He closed his mouth and when he broke the chocolate shell, molten lava of milk chocolate coated his tongue.
“Oh my God,” he moaned, chewing. “What is this?”
“My cousin came back from Switzerland and brought these truffle balls. She snuck them in a stuffed animal with a note. I tasted one and I couldn’t stop. Good thing she sent me two bags.”
Chocolate was on the list of forbidden foods for many of the residents. It wasn’t that they could never eat it, but at a time when their bodies were so new to the healing process, milk chocolate could trigger a blood sugar spike, according to Damian.
Looking at Bindi, Grayson narrowed his eyes. “How many have you had?”
“Three or four,” she admitted coyly. He kept staring at her. “Maybe seven or eight.”
He made a quick dash and grabbed the bear, holding it high. “I think I should store these with me for safe keeping.”
“Like hell you will,” she said, jumping to try and get the bear from him. Why did he have to be so damn tall and why wasn’t her five-foot-eight height enough? She stopped momentarily, breathing heavily and growling at the satisfied look on his face. She had to wipe it off and that was when she came up with a different tactic. Narrowing her eyes, she poked him in the ribs. That produced the reaction she needed as he gasped and lowered his arms. She did it again and Grayson felt his knees weaken. It was a good thing the bed was right behind him. He had no idea he was even ticklish and unfortunately had no way to fight back against the assault.
Bindi grinned evilly, enjoying the torture she was inflicting. He was laughing so hard that he couldn’t breathe and if he was ever going to survive this he had to stop her. He put his arms around her and held her close to him. She squealed and laughed, pleading for him to let her go and give her the bear. She got an arm free and reached for it, her breasts brushing against his chest. Their laughter was dying down. Her hot breath moistened his lips. He looked into her eyes and saw them burning bright. He’d never seen a more beautiful sight in his life.
https://www.facebook.com/AuthorPalessa
https://authorpalessa.wordpress.com/
https://www.goodreads.com/author/show/7765546.Palessa
https://twitter.com/authorpalessa
http://www.beaucoupllcpublishing.com/palessa/
http://myBook.to/PortraitofGray 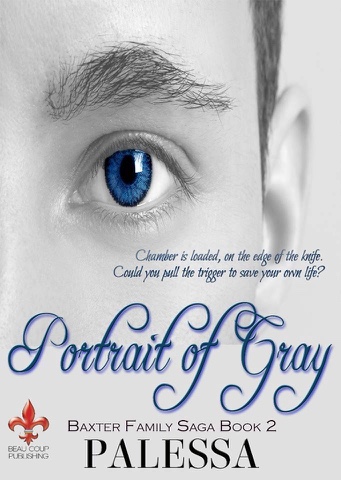 Posted by Cheekypee reads and reviews at 04:14